Life-changing bananas and poverty-preventing grasses: genetics are rejuvenating the planet

By Professor Pat Heslop-Harrison, Department of Genetics and Genome Biology

Remember when you were younger, or possibly still now, you’d get that mid-afternoon hunger, reach for a sugary snack, only for a relative to tell you to grab a banana instead? Although perhaps not as tasty, bananas are full of the goodness that we need to function. Among other benefits, bananas contain potassium that keep our hearts strong, vitamin B6 that we need to make oxygen-transporting hemoglobin, fibre for digestion and carbohydrates that give us energy. They also have a high starch content, which provides our bodies with glucose, our main source of fuel. There’s no doubt that they’re an essential food for us, but their Ethiopian relative is a literal life saver.

Imagine a taller, wider banana tree. Except there’s no bananas growing on it, and its trunk can grow to one meter wide. That’s Ensete ventricosum, also known as the ‘false banana’. Ensete only grows in Ethiopia and it’s the main source of starch for Ethiopians. Forget bread, potatoes or rice, ensete is harvested for its starchy pith, which is pulped, fermented and left underground until it resembles a heavy bread, which is then eaten with milk, cheese, cabbage, meat or coffee. “Ensete is the staple food and main source of starch for 20 million people as well as livestock in Ethiopia,” explains Pat Heslop-Harrison, Professor of Plant Cell Biology and Molecular Cytogenetics at the University of Leicester. It’s vitally important for Ethiopians, but farmers who are under pressure to grow this ensete face a big challenge – keeping the plants alive and healthy, free from diseases, and select varieties which will be productive despite climate change. That’s where genetics comes in.

“In collaboration with Ethiopian and other colleagues, we study the germ plasm from the range of ensete that farmers are growing in Ethiopia, extract the DNA, measure the genetic diversity and match that up with the issues that farmers face growing their crops,” says Pat. “That way, we can select and create modified versions of the crop whose newly-designed genetic makeup makes them invincible to disease and viruses, and can even dissuade insects from damaging the crop.”

That means farmers can grow more crops that are stronger and healthier, providing a much-welcomed boost to their income and more food to go round in Ethiopia. It’s a win-win situation.

But it’s not just in Ethiopia where Pat and his international team are changing lives. They’re studying the biodiversity and characteristics of species around the world, including cereals such as oats in Europe and Asia, brassicas such as cabbage, mustard and oilseeds in India, and forage grasses (plants eaten by livestock) in Colombia that will not only make life easier for farmers, but also increase living standards, reducing civil unrest.

Cattle farming is one of the most widespread agricultural activities in Colombia, with cattle occupying 80% of the country’s agricultural land – that's an average of one cow per 3.5 acres, and a lot of mouths to feed. Traditionally, farmers would move cattle between fields, giving the grass time to regrow and ensuring there’s plenty of food to go round. But in mountainous areas, herding cattle up hill is a tiring, time-consuming exercise and damaging to the environment. 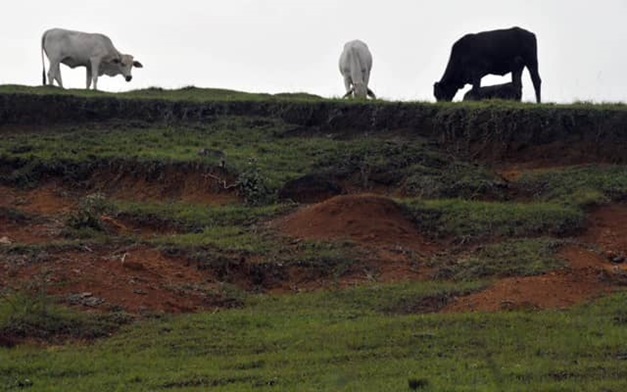 We’re working with an institution in Colombia to determine the genetic relationships between forage grasses, and how we can create hybrid versions that will benefit farmers by increasing the yield and sustainability of grasses. This means the cattle can stay put and the environment isn’t damaged by over-grazing.

More grass means healthier cattle. Healthier cattle means smallholder and family farmers can make more money. And more money means that Colombians can afford to live. Poverty is a serious issue in Colombia, and it’s a leading cause of internal conflict in the country. “Just by creating a grass that’s more sustainable, we can help to resolve one of the biggest problems that Colombians face today,” says Pat.

Helping to sustain the world

In 2015, all United Nations Member States adopted the 2030 Agenda for Sustainable Development. This agenda is a blueprint for restoring the planet – combatting against the destruction that humans have inadvertently inflicted upon it. At the heart of the agenda are 17 Sustainable Development Goals, which, if achieved by all member states, will end poverty, improve health and education, and reduce inequality, and at the same time tackle climate change and preserve our oceans and forests. “Our work is contributing to the survival of the planet as we know it,” says Pat. “By exploiting the genetics of crops and wild species, we can create the best combination of genes to create a species of crop that is, ultimately, healthier and stronger.”

For farmers, stronger crops mean more money and less poverty. For society generally, it means there’s more food to go round. “Over my career, I've seen the impact that genetics has had on crop production – it’s helped us to keep pace with the demands of the ever-growing population of the planet,” Pat continues. “We by no means have an adequate amount of food for everyone, but without improving the genetic characters of crops, we’d be destroying much more of the environment out of sheer desperation.”

The weird and wonderful world of genetics

Being a small university laboratory means Pat and his team can successfully work in national or international labs in their mission to change the world through more sustainable agriculture. The Leicester laboratory can collaborate on more projects, adopt new techniques faster and influence policy makers on life-changing issues. From discovering viruses hidden in potato-family genomes – the equivalent of Hepatitis B in humans – to figuring out the secret formula for creating more digestible grass, there’s never a dull moment. “The impact we can have and are having on society is incredible,” says Pat. “We are changing the future for everyone on the planet as well as protecting and nurturing the planet itself, and that’s what I love about my job. I’m extremely proud of the impact we’re having on the world, and we’re only really getting started.”

Life has always been about give and take

Natural disasters are not the biggest threat to life - human consumption is. Professor Mark Williams explains the importance of creating mutualistic cities in hope for a better, more natural future.