Peatlands around the world are being destroyed to make way for plantation development, logging and mining

By Professor Susan Page, School of Geography, Geology and the Environment 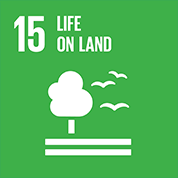 These precious landscapes, with their huge reserves of terrestrial organic carbon, play a vital role in climate mitigation and we ignore their destruction at our peril.

Sue Page, Professor of Physical Geography at the University of Leicester, has spent her academic career studying the importance of peatlands. Her work has taken her from the swamp forests of Indonesia to the world’s most extensive tropical peatland in the Congo, and back here to the UK and the agricultural Fenlands of eastern England.

Built up over tens of thousands of years, peatlands are among the most valuable ecosystems on earth. Left alone they are also a highly efficient carbon sink, sucking carbon dioxide out of the atmosphere and locking it away in the ground.

Professor Page says: “The more we disturb our peatlands, we are converting what could be a really efficient piece of climate mitigation machinery into something that is actually driving climate change. It is really important that where we have undisturbed peatlands we keep them in that pristine state. But we also need to think about what we can do to mitigate the land use changes that have already taken place and that is where our work comes in.”

A lifelong fascination for biology

A degree in Biology and a PhD on wetlands plunged Sue into a lifelong career studying peat-forming systems. “I wasn’t interested in cells or genetics, I was interested in whole ecosystems and how they functioned. That’s what excited me about biology.”

After securing a lectureship at the University of Leicester, Sue realised that very little work had been done on peatlands in the tropics, particularly in southeast Asia. Very soon she was heading off to study what were, in 1993, pristine forested peatlands in Central Kalimantan, Indonesia.

“That was fantastic. We set up a field camp and went back there several years running for data collection, trying to understand the ecology of the forest and the relationship between the forest and the underlying peat and how that system functioned.”

Two years into the project, a million hectares of natural peatland adjacent to their field camp was earmarked for the Mega Rice Project - a plan to make Indonesia self-sufficient in rice production.

A wake-up call for governments around the world

By the time the Indonesian Government recognised that the project was doomed to failure, an area of peatland one third the size of Belgium had been deforested and more than 4,000km of drainage channels had been constructed. Worse was to come. In 1997, driven by the El Niño climate cycle, Indonesia was hit by severe drought. Huge areas of dried-out peatland, topped with tinder dry degraded forest, ignited - resulting in some of the worst fires for many years.

The research team could only watch as the disaster unfolded but they sensed they were also witnessing a major scientific opportunity. 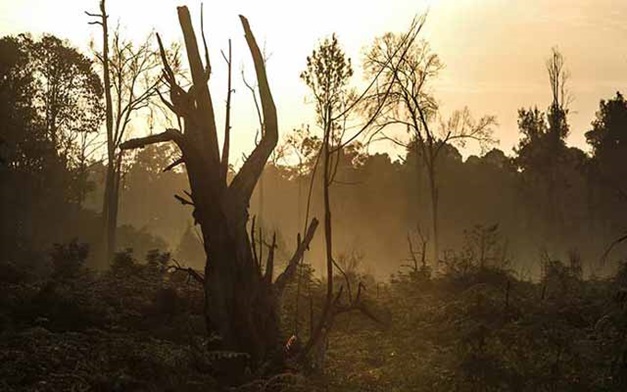 We were able to obtain data from some of the earliest satellite images to assess the extent of the fires, while our field work focused on the impact of fire on the ground.

They calculated that the amount of carbon released into the atmosphere as a result of the fires and deforestation was equivalent to 13-40% of the mean annual global carbon emissions from fossil fuels in 1997.  This contributed significantly to the largest annual increase in atmospheric CO2 concentration detected since records began in 1957.

Their findings, published in Nature in 2002, were the first to draw worldwide attention to the impact of peat and drainage of peatlands on carbon emissions into the atmosphere. Despite the warning signs, Indonesia and Peninsular Malaysia saw a massive increase in the conversion of low-lying peatland into agriculture in the years that followed.

Professor Page’s research refocused on the oil palm, pulp wood and paper production industries and the resulting greenhouse gas emissions and how to mitigate the impact of these activities. Her findings have fed into revised policies on biofuels around the world.

In 2006 she co-authored the influential Peat CO2 Report. “This was the first report that really tried to get a handle on the extent of greenhouse gas emissions from peatland conversion in South East Asia. We also added in a component about the impact of fires. It made Indonesia the third highest greenhouse gas emitter in the world. And nearly all of that was coming from land use change, not from fossil fuel combustion.”

The challenge was to bring influential plantation corporations on board to recognise their obligations against a backdrop of economic imperatives.

Peatlands continue to be drained and fires have become a near-annual event, with some years worse than others.

“It’s a bit like balancing on a tight rope. On the one hand if we wanted to completely mitigate greenhouse gas emissions, we would say you have got to stop what you are doing. You’ve got to raise the water levels because it is drainage that drives the decomposition of the peat and restore the forest.

“But we have to bear in mind that we’ve got huge landscapes that are under economic uses that provide livelihoods for people which is important in countries like Indonesia.

“So, we have to minimise the damage where we can and then mitigate greenhouse gas emissions. We need companies to recognise that water management is absolutely critical and try to get them to consider raising water levels to a height where they can still maintain an economic use of the land.”

Smallholder farming and capacity building have their part to play

Professor Page is now involved in research looking at smallholder landscapes and the impact these farming practices have on the environment.

About 50% of peatlands in southeast Asia are under some form of agricultural use. About 25% is large-scale plantations, the other half is operated by smallholder farmers.

The research team wants to learn more about the social aspects of farmer livelihoods and their willingness to manage their land and farming practices in a less harmful way within the constraints of their market, incomes and expectations. The research is being carried out in collaboration with local institutions.

“This is very much co-building research and where necessary capacity building so research can be driven at a local level. I am really keen that any research we do has an applied angle. If it has a policy angle, we need to get that policy into the community in a way that they will understand and hopefully use in an appropriate way.”

Disaster management is now on the agenda

“We don’t really understand the impact of noxious gases and particulates from peatland fires.  In communities where health may also be constrained by poverty there could be long-term health implications. We need to know how to build resilience in communities affected by the fires, and drought, and learn how to build back better.”

COVID-19 hasn’t escaped Professor Page's notice either. She is already involved in putting together a research paper looking at the impact of COVID on tropical peatland – not just in souitheast Asia but in other parts of the world as well.

There’s a lot to learn from southeast Asia

In recent years Professor Page has been working closely with vegetable and salad growers on the Fenlands of Eastern England. She has been involved in several projects looking at the scale of peatland gas emissions and how to mitigate emissions in an area important for food security and the regional economy.

In the Congo she and her fellow scientists are working with the local communities to protect natural peatland under potential threat from logging and oil exploration.

Climate mitigation has moved up the policy agenda in a much more positive way and more people are listening to what Sue and her fellow researchers have to say.

‘It takes a long time to have any positive impact and, in part, that’s a trust issue. After the bad years - the early 2000s when you really felt you were banging your head against a brick wall and nobody wanted to listen - climate change agreements and policy revisions have highlighted the importance our natural ecosystems play in climate mitigation.

“The Mega Rice Project, the fires and now COVID. I am not short of work for all the wrong reasons. No, I am not allowed to retire! There are a lot of frustrations but climate mitigation has moved nearer the top of the agenda in a much more positive way.”

Professor Page's work has included projects that are part of the University of Leicester’s portfolio of Global Challenges Research Fund projects, carrying out cutting-edge research in partnership with local universities, policymakers and communities that addresses the challenges faced by countries experiencing chronic disadvantage.