Life has always been about give and take

Exploring future relationships between people and nature that can thrive

By Professor Mark Williams, School of Geography, Geology and the Environment

Mark Williams, Professor of Palaeontology, explores the evolution of life on Earth, going back hundreds of millions of years ago. He is interested in why some species and ecologies are survivors, whereas others go extinct. Latterly he has used his knowledge of the fossil record to help quantify the scale of human impacts on life in the 21st century, and to try and discern patterns of co-habitation between humans and other species that might be more beneficial.

So, what inspired Mark to become a scientist? Very unsurprisingly, it was Sir David Attenborough – back in the 1970s Mark was inspired by Sir David’s ‘Life on Earth’ programme.

“I think there’s a whole generation of geologists that were inspired by this fascinating programme. When you look at what we have done to the Earth since the 1970s the damage is considerable. It’s not natural disasters that are the biggest threat to life – it’s human consumption, particularly by those of us living wealthy lifestyles.”

Much of that consumption is focussed in urban areas, and these are increasingly using up the Earth’s resources of energy, water, life, materials and clean air. How might we design cities that develop a more mutually beneficial relationship with the Earth? At the moment it’s a very one-sided relationship with the Earth’s resources being taken, but not much being given back. That's not sustainable and it might well lead to a catastrophe for life. And the fossil record shows that when that happens, it takes millions of years for biodiversity to recover.

What is a mutualistic city?

One of the areas that Mark is researching, and one influenced by his knowledge of life’s struggle for survival, is the idea of ‘mutualistic cities’ – what does this mean, and what is the difference between a smart city and a mutualistic city?

Mark explains “This is about designing urban environments that are much more like natural ecologies, where energy consumption is based on renewable materials, where water is captured locally and recycled, and where materials are utilised in a sustainable way, and not discarded or bulldozed after their life. And, perhaps most importantly, it is a place where people interact beneficially with each other to build strong and resilient societies, and where people interact with other species in a deliberately beneficial way. That is how we can build relationships that will endure.”

“One very simple example would be for people to let part of their gardens grow wild, to attract nature in. We need to move away from the mindset of neatly manicured lawns, towards one where making space for beetles, birds and earthworms is much more important. Gardens where we leave holes in the fence so hedgehogs can travel through, and where that dilapidated patch of ground behind your dustbins becomes a point of envy with your neighbours – for its biodiversity –and not a point of disdain. That's just for a start though, and each and every one of us needs to think about how we can interact well with nature, and how our consumption of materials – everything from oil to palm oil – is affecting the planet we live on.”

The good news is that there are many cities around the world trying to obtain their energy from sustainable sources or trying to live in a better relationship with nature. The bad news is that no city is truly mutualistic.

This is a real issue, because humans have become a predominantly urban species for the first time in 300,000 years – more than 50% of us live in towns and cities – and it is in cities that most consumption takes place. 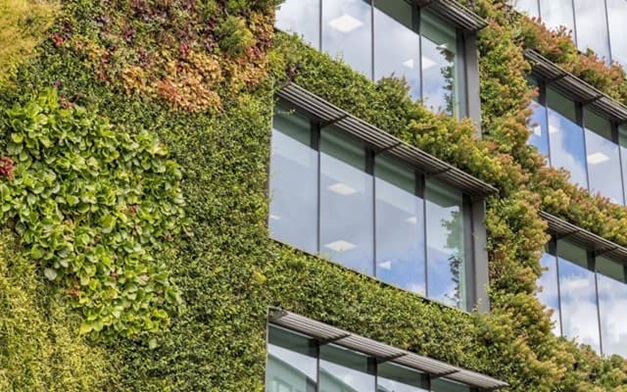 One could imagine a city of the future to be green, its surfaces making space for other life. Its buildings may grow and repair themselves, and at the end of their life they will decay and be recycled, making places for other life to live in, just as a fallen tree does.

What can we do?

Mark explains that technology can play its part here, but only if people are prepared to change their behaviour too. “So, we could take inspiration from nature, and design buildings that have natural air conditioning systems. That would lower the building’s energy requirements, but if the people within the building continue to use energy-consuming devices, without thinking about the impacts on nature, the problem will not be solved.”

Instead, we need a whole system approach, one that enables us to consume without exhausting the Earth’s resources. So, in that building with the natural air conditioning, people would recycle their water, wasting very little. They might try to source – or even grow – some of their food locally. And food that is imported would be sustainable too. That food will need to be based more on vegetables rather than meat, simply because it costs less land to produce the former. And the energy in this building will be renewable too, and who knows, it might even be based on solar panels that mimic the leaves of plants.

So, what is the future?

When asked ‘what does he see the future of his research as being’ – ‘what would be a game-changing moment’, Mark replies with a smile “Well, firstly as a geologist I would have to come back in 200 years’ time to properly assess that!

"I have spent most of my career looking at the fossil record of life, and how life has managed to survive over millions of years. There are messages in that record about success and failure that we can learn from. So, my focus now is very much on trying to learn from the past and mitigate the impact of humans on life in the present and near future.

"The game-changer would be if people fully appreciated the ecological impact of digging into a plate of fried prawns brought all the way from the Far East, or a bar of chocolate made with palm oil – and began to change their behaviour to reflect that.

Going back to the small example of introducing wildlife to your garden – leave some space for nature and it will bounce back.”

Professor Pat Heslop-Harrison explores how modifying the genetic makeup of plants to make them stronger is helping in the fight against poverty.