The idea of military space power might conjure up images of laser battles, spaceships and far-flung worlds – not unlike a real-life Star Wars

The reality of using space in conflict isn’t purely the preserve of science fiction.

Dr Bleddyn Bowen is a world-leading expert on space warfare, space strategy and international relations at the University of Leicester – and explains how the fight for supremacy over our heads is happening right now, and its possible implications on our everyday lives.

Dr Bowen is one of few academics globally analysing military use of space, from major players like the United States and China to smaller states and commercial actors.

“I’d describe myself as a strategist, but that doesn’t mean looking to the future,” he says. “As one of the few people looking at this from outside government, industry, and the military, I can be more independent and forthright in my analysis.

“So many people think that space warfare is all about the future, but in the same way that nuclear war is in the future – it’s not happening now, but it might tomorrow – it’s about examining the space side of modern warfare.”

The current military use of space includes the obvious, like surveillance satellites, navigation systems like GPS, and communication systems, as well as more secretive technologies.

“A lot more countries are wanting to tap into the space industrial sector, to develop economically with space technologies, as the US has done for a long time,” he continues.

“Space weapons are proliferating among many major powers. The weapons which are proliferating heavily are based on Earth and ‘pop up’ into space, to undermine a potential enemy’s use of space, perhaps through destroying a satellite or disrupting its radio communications.”

Instead, Dr Bowen explains, it’s important to consider outer space as just another environment for modern-day militaries to account for in their extensive planning and strategies.

The concept went mainstream in 2019 when President Donald Trump established the US Space Force. 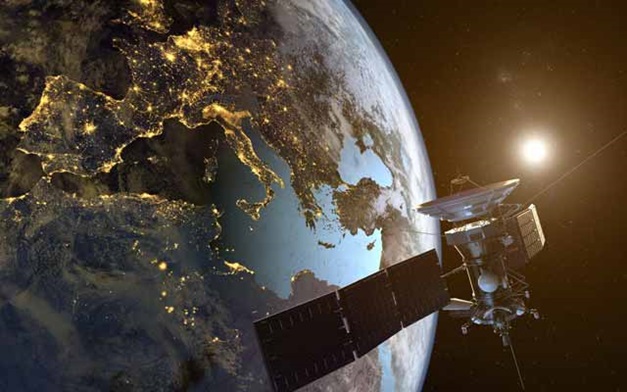 I remember thinking ‘that’s interesting – I liked this before it was “cool”, as it were’. Space is another environment like the sea and the air, so conceptually it was a natural move to make, especially given the size of the US military in space.

“In this field, what you get is basically everybody else imitating what the Americans have done for the past 35, 40 years, which is to develop an extensive range of space infrastructure to support all manner of military and intelligence activities, from satellite navigation to intelligence surveillance and reconnaissance, to supporting individual military units on the battlefield in actual engagements, and making tactical application of space technologies.”

Dr Bowen uses his expertise to brief and advise decision-makers on the next steps in space. He has advised the Ministry of Defence and Cabinet Office to discuss UK strategies in space, and is often used as a sounding board by their American counterparts to present ‘a UK perspective’ on military use of space.

He has advised the Prime Minister’s policy unit by contributing to high profile research like the UK Integrated Review of Security, Defence, Foreign Policy and Development, and has also appeared before the House of Commons’ Defence Select Committee in 2020 and Exiting the EU Select Committee in May 2018. He also addressed the NATO Engages Summit London in 2019 as NATO recognised space as an ‘operational domain’.

But it’s important to remember that military space technologies don’t remain inaccessible, in orbit around the Earth – they often find their way into our everyday lives. GPS is the most famous and ubiquitous of these tools.

“A lot of people will be aware of GPS in their phones – it’s the usual example to give – and it’s become a bit of a cliché for the space community.

“But it’s very easy to understand. Whether you’re trying to find your date for the evening or assassinate an enemy leader, that same system is there to guide you on your way with great precision and accuracy.”

It’s not just mapping, either. GPS provides the time used by systems across the world, from banks to energy grids and everything in between.

Dr Bowen adds: “GPS has become a gold-standard of human infrastructure, even if it might not be quite as exciting for people to think about.”

Google Earth, Sky TV and even the Hubble Space Telescope are all examples of science fiction-turned-fact. (In fact, famed science fiction writer Sir Arthur C Clarke first coined the idea of geostationary relay satellites in 1945, more than a decade before Sputnik shocked the Western world.)

“Hubble is another example of military technology used for another purpose. We’re quite narcissistic as a species, with all these satellites up in space looking back at us. Hubble is based on the same platform as American spy satellites, just looking the other way.”

Following publication of his book War in Space: Strategy, Spacepower, Geopolitics in 2020, Dr Bowen is set to examine US military space history, as well as delving into the impact of European Union space infrastructure like Galileo and Copernicus.