By Professor Nial Tanvir, School of Physics and Astronomy

The collision of two neutron stars, 140 million light years away, created waves among the astronomical community not just for what it told us about the stellar interaction itself but also for how it was observed and analysed. Professor Nial Tanvir from the University of Leicester’s School of Physics and Astronomy was one of the key figures in this event.

Professor Tanvir has a fascination for gamma-ray bursts (GRB), the enormous, distant explosions which provide insight into the deepest depths – and hence the earliest history – of the universe. Back in 2009 he led a team which identified what was then the most distant object ever identified, a GRB with a redshift of 8.2 about 13 billion light years away.

Four years later, Professor Tanvir made another step forward, leading a team which used data from the Hubble Space Telescope to identify the first known kilonova. This is the immediate after-effect of a short duration gamma-ray burst (SGRB), an intense flash lasting for just a couple of seconds. It was theorised that SGRBs – and hence kilonovae – might be caused by the collision of two extremely massive but incredibly compact stellar objects such as two neutron stars (or a neutron star and a black hole).

Such collisions are hugely important because they offer a potential answer to one of the great outstanding questions of physics: where do heavy elements come from? Elements heavier than iron (called r-process elements, meaning rapid neutron capture) aren’t created inside stars like lighter elements. But they must be created somehow, somewhere – and neutron star mergers are likely candidates. Added to which, such collisions should be a rich source of gravitational waves.

On 17 August 2017, two facilities – the Laser Interferometer Gravitational-wave Observatory (LIGO) in the USA and the Virgo interferometer in Italy – identified a gravitational wave source which correlated with gamma rays detected by NASA’s Fermi Space Telescope. Professor Tanvir was at the time principal investigator on a project called VINROUGE which was using the VISTA facility in Chile, the world’s most powerful near-infra-red survey telescope, to search gravitational wave events for evidence of a kilonova.

“We were really excited when we first got notification that a neutron star merger had been detected by LIGO, and immediately triggered observations on several telescopes in Chile to search for the explosion that we expected it to produce,” Professor Tanvir recalls. “In the end we stayed up all night analysing the images as they came in, and it was remarkable how well the observations matched the theoretical predictions that had been made."

The LIGO/Virgo source was tracked down to the galaxy NGC 4993 so NASA’s orbiting Swift observatory, designed for fast response to such discoveries, was immediately pointed in that direction. 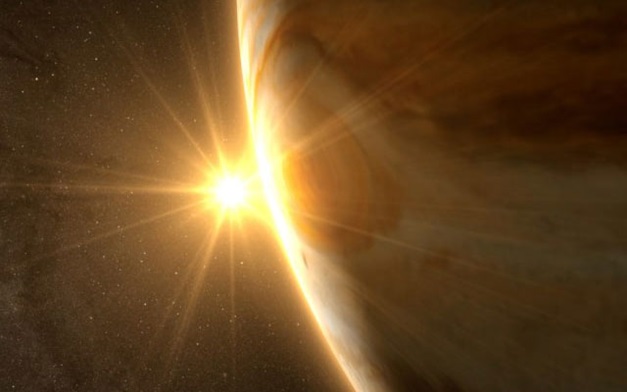 These observations were a major step forward in solving a puzzle that goes back more than half a century. I find it amazing to think that all the gold in the Earth was probably produced by merging neutron stars, similar to this one, that exploded as kilonovae billions of years ago.

Swift has both x-ray and ultra-violet/optical telescopes and delivered a real head-scratcher. The team expect x-rays but no UV radiation; what they found was a bright UV emission but no x-rays! This provided fascinating insight into the nucleosynthesis of heavy elements, suggesting that lighter material was blown away from the merger, emitting UV/blue light, and leaving heavier material behind.

“I have to say, when we first located the kilonova explosion, and later as we followed its evolution it seemed almost surreal,” says Professor Tanvir. “We had been planning for years how we would make these observations given the chance, but I don't think anyone expected the first case to be so perfect.  It did mean working round the clock for several weeks, but these opportunities don't come along very often, so it was worth it.”

What was also unprecedented was the combination of light-detecting astronomy with gravitational wave detection. The two disciplines had previously existed separately but either alone could not provide the necessary data to understand what was happening in the neutron star merger. Professor Tanvir, for one, is very excited by the possibilities of this new two-pronged approach:

“This is a key breakthrough, since it is the first time ever that we've been able use both light and gravitational waves to study something – in this case the merger of two neutron stars – happening far away in the universe. This discovery has opened up a new field of science that we call `multi-messenger' astronomy, where we use information gathered from both gravitational waves and normal electromagnetic light, to probe some of the most exotic and extreme events that happen anywhere in the universe.

Additional research and analysis has been done since the publication of the paper ‘The Emergence of a Lanthanide-rich Kilonova Following the Merger of Two Neutron Stars’ in The Astronomical Journal Letters in October 2017, and more work on further exciting discoveries awaits Professor Tanvir and his colleagues, in Leicester and around the globe.

The idea of military space power might conjure up images of laser battles, spaceships and far-flung worlds – not unlike a real-life Star Wars. Professor Bleddyn Bowen provides an insight into the reality.

Fingers off the button

Professor Andrew Futter explains that it’s time for the world to rethink its nuclear weapons strategies and champion international peace.