The genetic investigation that confirmed the identity of King Richard III

By Dr Turi King, Department of Genetics and Genome Biology, and Archaeology and Ancient History

In the annals of University of Leicester research, two discoveries stand head and shoulders above the rest: the invention of DNA fingerprinting in 1984 and the discovery and identification of the mortal remains of King Richard III in 2012.

The impact of the King’s rediscovery was enormous and fundamental, the press and public interest was global, the consequences were unprecedented and unique.

Above all, the research itself was truly interdisciplinary. Geneticists, osteologists, archaeologists, weapon experts, engineers, Latinists, forensic pathologists, historians and genealogists all played key roles in the project. Referencing Leicester graduate CP Snow’s famous 1956 lecture, the journal Nature wrote: “The University of Leicester has managed to unite the two cultures of science and humanities in a way that few have before.”

However, once a skeleton buried in the right location was unearthed, a simple archaeological dig became the most extensive collection of multi-disciplinary and inter-disciplinary research projects ever undertaken at any British university. 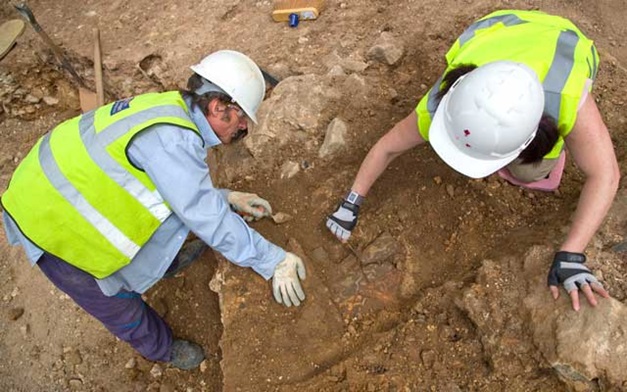 The discovery has created a lasting legacy for the University of Leicester – speaking of its research and teaching excellence, and its inextricable links with the city’s past and its future success.

First there was the osteological analysis, studying the bones to estimate the age of the skeleton, and the age of the individual when he died. The wounds were analysed using computed tomography, a technique developed at the University’s East Midlands Forensic Pathology Unit, revealing at least eleven scars on the skull, jawbone, ribs and pelvis. The twisted spine was also examined, proving that the individual was not a ‘hunchback’ but did suffer from scoliosis. This was one of the greatest revelations, as received opinion held that all claims of King Richard’s deformity were simply Tudor propaganda. A sadly now-outdated Horrible Histories song confidently stated: “Didn’t have a hunch, always walked my full height.”

Dr Turi King led the genetic investigation to establish the identity of the remains beyond doubt, comparing mitochondrial DNA from a tooth with that of two direct descendants of King Richard’s mother, their identity confirmed through exhaustive genealogical research.

This unique project spoke to different people across the world for different reasons including academic, heritage and archaeological communities; staff and students; Parliament, where members debated the significance of the find; but above all the public – who thronged to the site, poured over the online resources, watched the videos and followed the events via the media and through social media.

The impact of the discovery was staggering. It added more than £59 million to the City of Leicester’s economy, from the time of the discovery to the reinternment, according to an independent assessment, of which around £4.5 million was generated during the two weeks of reinternment activities. The value of media coverage obtained throughout the project was £16.5m (Advertising Value Equivalent), with one billion people around the globe given the opportunity to see coverage of the discovery and reinternment.

The discovery strengthened the University’s links with communities across Leicester and further afield across the county of Leicestershire, as well as with Leicester Cathedral and its diocese. In addition to the worldwide attention, the discovery and identification of King Richard placed the University of Leicester at the heart of the city’s narrative and economic regeneration projects. A multi-million pound Richard III visitor attraction opposite the Cathedral where Richard III was reinterred now provides access for public viewing of the gravesite in a suitably reflective setting.

The University did not just rescue King Richard III from an ignominious hole. They cast light on his story in front of a fascinated world. The debates about whether he was a good king continue to rage, perhaps now more fiercely than ever, but everyone can now see that there was a lot more to Richard than Shakespeare’s “poisonous hunchbacked toad”.

Dr Emma Parker explores the cultural significance of literary anarchist and Leicester native Joe Orton, over a half a century since his death.