A ground-breaking collaboration between the University of Leicester and the National Trust, ‘Colonial Countryside’ is a child-led history and writing project supported by a team of historians. The first ever study of Trust houses’ colonial connections revealed that over a third had direct links to the British Empire.

The Colonial Countryside report became an intense focus of media scrutiny and public debate during the 2020 Black Lives Matter protests, when the heritage sector came under pressure to address its slavery links.

Before Colonial Countryside, the Trust had run a number of initiatives to make these links clear to visitors, notably during the 2007 bicentenary of the abolition of the slave trade. However, such exhibitions were temporary and it was hard to produce a lasting impact. Knowledge of these colonial links remained little-known to heritage professionals and audiences alike.

Colonial Countryside’s ambitious aim was to transform the heritage sector’s approach to its colonial links, through the National Trust’s leadership. Arts Council England and Heritage Lottery Fund paid for 100 BAME pupils to learn about colonial history through the lens of local heritage. These children participated in writing and public speaking workshops throughout the country. They communicated this history in speeches at a children’s conference (at the University of Leicester) and at national conferences (including the British Museum’s annual conference in 2019). The pupils produced popular Twitter information videos, rewrote guidebooks, commissioned an artist, wrote visitor pamphlets and initiated an international collaboration between the Trust and an Indian heritage partner, now under negotiation. The children co-produced exhibitions at four Trust properties: Penrhyn Castle, Sutton House, Kedleston Hall and Basildon Park. 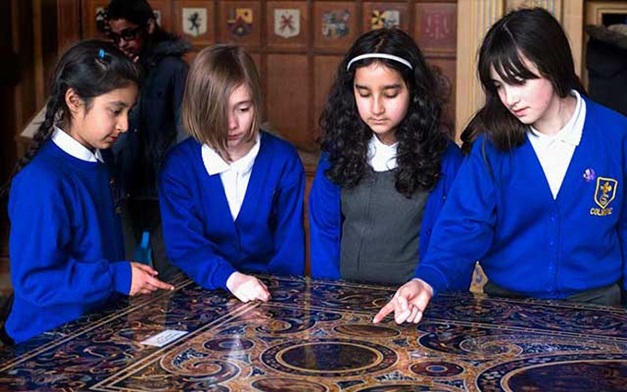 Assessment of children who were involved in Colonial Countryside showed that their written, spoken and leadership skills improved significantly, as did their commitment to British heritage. The project also directly led to curriculum change in 63 primary schools, which are using Colonial Countryside lessons.

Assessment of children who were involved in Colonial Countryside showed that their written, spoken and leadership skills improved significantly, as did their commitment to British heritage. The project also directly led to curriculum change in 63 primary schools, which are using Colonial Countryside lessons. Colonial Countryside pupils caught the public imagination, winning hearts and minds through their impassioned appeals to tell country houses’ neglected colonial stories. The children’s work itself inspired media coverage, including a three-part ITV documentary featuring the Colonial Countryside project.

As a result of the project’s success its director, Professor Corinne Fowler of the University of Leicester’s School of English, was seconded to the Trust to conduct tests and learn the best ways to train staff and volunteers as well as to transform country houses’ online and on-site interpretation. The Colonial Countryside’s Massive Online Open Course (MOOC) is under development.

During the COVID-19 lockdown, Colonial Countryside teaching materials were made available to parents for use in home schooling. Demand for these materials skyrocketed following the Black Lives Matter movement. Colonial Countryside was uniquely positioned as an initiative to respond to this vastly increased interest in black British history. An Arts Council England-funded book of creative commissions and historical essays based on Colonial Countryside is scheduled for publication by Peepal Tree Press and the National Trust in 2021.