Learn more about the events and exhibits held for the 50th anniversary of Joe Orton's Loot. 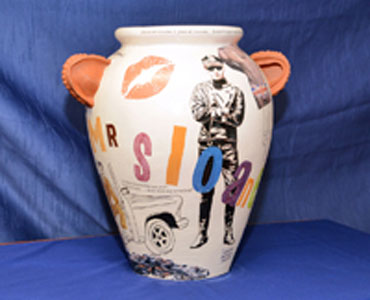 Kenneth Cranham and Leonie Orton Barnett unveiled an interactive exhibit celebrating the work of Joe Orton specially commissioned by the University Library. The exhibit featured a commemorative pot created by ceramicist Rachel Barnett, Orton’s niece, to mark the 50th anniversary of his earlier work, Entertaining Mr Sloane. It showcased material from the Joe Orton Archive held by the University Library’s Archives and Special Collections, and was curated by Natasha Barrett and Ceciel Brouwer from the School of Museum Studies. 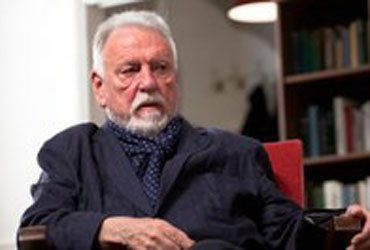 An Evening with Kenneth Cranham

Kenneth Cranham, winner of the 2016 Olivier Award for Best Actor, reminisced on more than 50 years in theatre, shared memories of his unique relationship with Leicester-born playwright Joe Orton, and discussed his favourite leading roles from Hal in Orton’s Loot (1966) to André in Florian Zeller’s The Father (2015-16), winner of three Moliere awards, including Best Play. This event was chaired by Emma Parker and featured Orton’s sister, Leonie Orton Barnett, and was organised in conjunction with the University of Leicester to mark the 50th anniversary of the London premiere of Loot.

Joe Orton (1933-1967) was one of the most original and important playwrights of the post-war period. As Orton was born in Leicester and the University holds the Joe Orton Archive, the School of Arts hosted a special event to celebrate the 50th anniversary of his awarding-winning play, Loot.

A black comedy that features a coffin, a glass eye, a set of dentures and the dubious use of Mars Bars, Loot satirises religion, police corruption and sexual mores. The play premiered in 1965 but flopped. However, following extensive revisions, it was relaunched in 1966 and went on to win the prestigious Evening Standard 'Play of the Year' award.

The talks were complemented by an exhibition about Loot that features rarely-seen material from the Joe Orton Archive at the University of Leicester.

To mark the 50th anniversary of the London premiere of the Leicester-born playwright's ground-breaking play Loot, there was a small display of material from the Orton Archive at the University of Leicester.

Read Dr Samantha Mitschke's blog about preparing the exhibition. This exhibition has been generously supported by an AHRC Cultural Engagement Award.