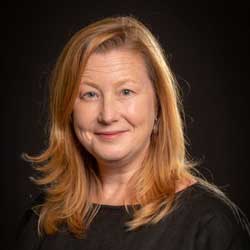 Dr Emma Parker is an Associate Professor in Twentieth Century and Contemporary Literature, focusing on women and gay writers and issues related to gender and sexuality. Her research is based on the premise that literature has the power to reveal previously unseen truths about the world and inspire social change.

Dr Parker’s research on playwright Joe Orton revived interest in this working class, Leicester-born playwright and gay icon whose provocative black comedies satirised the Establishment and helped to define British counterculture in the 1960s. To mark the 50th anniversary of Orton’s three major plays and his death in 1967, Dr Parker produced a series of prize-winning events, exhibitions and educational resources. Dr Parker’s research has helped to enhance the public understanding of gay history, and has brought Orton’s work to new audiences.

Topics covered in my work include:

I led the AHRC and Arts Council-funded project Joe Orton: 50 Years On (2014-2020), which commemorated the 50th anniversary of Orton's three major plays and his death in 1967. This includes Yours Faithfully, Edna Welthorpe (Mrs), a collaboration with film-maker Chris Shepherd and winner of a Saboteur Award (2018).

I have co-curated two exhibitions on Joe Orton:

Read my essay on Loot

I welcome applications from students wishing to work in the following areas: