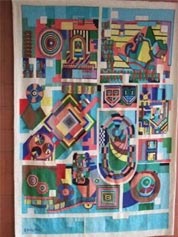 Measuring 1.6m by 2.0m, the Leicester Tapestry (aka the Anniversary Tapestry) was installed in the entrance to the Engineering Building in 1982 to celebrate the University’s 25th anniversary. Paolozzi, who was a friend and admirer of architect James Stirling, was approached by Professor Douglas MacLellan (Head of Department 1965-1988). Initial discussion on the design were held between the two men, also including Fiona Mathison, Artistic Director at the Edinburgh Tapestry Company, Dovecot Studios, where the tapestry would be woven.

For technical as well as artistic reasons that design was radically altered. The final design was done on paper in two different colour schemes, based on various codes used in engineering manuals as well as books on pattern making. Once selected, the colour was especially evolved for the tapestry using several disciplines - gouache on line diagrams, then colour xerox for further refinement. One version that emerged had strong colours accented and emphasised with white, the other version was paler with less white. After a number of weaving trials, the stronger colour scheme was adopted.

Decisions were also made at that time about the scale of the design within the tapestry dimensions, the number of warps (stitches) per inch and solutions to possible difficult passages in the design.

Like some machines in the engineering laboratories, the tapestry is a series of pieces of design, which interrelate and counterpoint each other. As in a machine, each element plays a vital role. Symbols used come from a variety of scientific sources covering a long period of time. The atomic table, for example, is from a German children’s schoolbook of the twenties yet the recurrent squares within squares now appear in the latest magazines on computer graphics. Other symbols owe their origins to dynamos, hydraulic presses, a computerised weather map, high power microwave electronics, certain types of sacred geometry, Wulff’s law, electric cables, the camera lens, and notions of phanotron. Students, professors and visitors should therefore be able to recognise, think about and hopefully enjoy the artist’s imagery and weavers’ skills.

Professor MacLellan passed away in 1999; a donation from his estate was then used to purchase a second Paolozzi artwork. The artist suggested a bronze cast of the maquette for one of his major recent compositions: an eight-metre long, five-tonne wooden flatbed locomotive carrying giant body parts which was created for the Royal Academy summer exhibition of 1999.

Entitled ‘London to Paris’, the bronze was installed in the MacLellan Room on the fourth floor of the Engineering Building in February 2001.

Its international fame does not rest on its being frightfully British, but on its being resolutely architectural, and in a manner that would justify itself in any company.