Opened in 1963 and widely regarded as one of the most architecturally important buildings of its era, the Engineering Building at Leicester is utterly distinctive. It stands out among the older and new parts of campus, forming (with the Attenborough Tower and the Charles Wilson Building) one third of the architectural triptych that defines the University’s silhouette.

Load the video related to: The University of Leicester Engineering building

The University of Leicester Engineering building

In this film, architect Alan Berman tell us how the building was designed by engineers, for engineers, and talks about the functionality of the building.

Between them, architects James Gowan and James Stirling, plus engineer Frank Newby, created a unique piece of modern architecture designed around both the specific needs of the Engineering Department and the particular corner of the campus available.

Atop the two cantilevered lecture theatres sit two joined towers containing labs and offices, their design inspired by the superstructure of an aircraft carrier. The rippling ‘waves’ of the two large glass roofs, angled at 45 degrees to the towers, face north to provide illumination without direct sunlight (which could affect delicate instruments).

There are actually two types of glass in the roof: translucent ply-glass with an inner layer of fibreglass, and opaque glass coated with aluminium. The distinction between the two only becomes noticeable at night when the building is illuminated.

The building’s walls are constructed of red Accrington brick and red Dutch tiles. Atop the taller tower is a water tank to provide hydraulic pressure, while the corner of the shorter tower is cambered to avoid overhanging part of Victoria Park. Within the ground floor workshop space, which is partitionable to provide flexibility, the floor is a series of concrete slabs that can be removed to provide foundations for machinery as required.

Visually stunning it may be, practical too, but the complexity of its design makes the Engineering Building very difficult (and hence expensive) to keep in good repair, a situation exacerbated by the restrictions of its Grade II* listing. Major work was carried out in 1988 and 1999 and 2015-7.

1957 - James Gowan and James Stirling are commissioned to design the University of Leicester’s new Engineering Building. 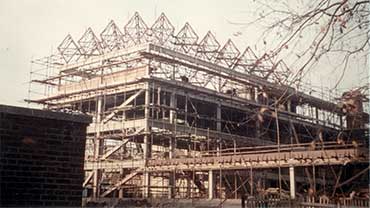 1960 -The firm of Felix Samuely and Partners begin construction on the building under the leadership of chief engineer Frank Newby.

1963 - Construction is completed. Staff and students move in.

1964 -The Leicester Engineering Building tops a poll in The Architects Journal to find the best building of the past ten years.

1965 -Stirling and Gowan receive the prestigious Reynolds Award from the American Institute of Architects for their work on the Engineering Building.

1971 -The building is featured on a postage stamp, part of a series depicting university buildings.

The same year, the first book-length work on the building is published - in Japan (text by Kiyonori Kikutake, photographs by Yukio Futagawa). 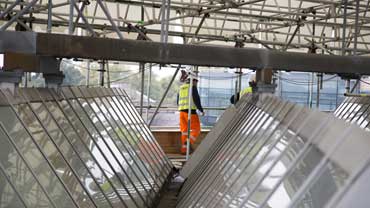 2000 - Phaidon Press publish John McKean's monograph on the building as part of their 'Architecture in Detail' series.

2009 -The building hosts a conference on 'Stirling's Red Buildings' organised by the 20th Century Society.

2011 - The University announces plans to extensively refurbish the Engineering Building, including replacement of the glass workshop roof.

2015 - Work starts on the massive refurbishment. The building was named as one of the UK's top 10 post war buildings by Elain Harwood of Historic England.