At the end of this case study, you should be able to:

Epigenetics is the study of heritable changes in gene expression caused by mechanisms distinct from the underlying DNA sequence i.e. it is caused my modifications to the genome that do not involve a change to the nucleotide sequence. This is most commonly achieved through DNA methylation although histone modifications such as acetylation, methylation and phosphorylation also play a role.

Epigenetics is often described as the missing link between the environment an individual is exposed to and disease; it describes the outward phenotypic appearance that is not the result to changes in the DNA sequence but instead, changes to the chemical tags that overlay the genome (the epigenome).

Tobacco consumption in the UK has been identified as the single largest cause of preventable illness and early death, with an over 100,000 estimated deaths in 2009 attributable to smoking-related diseases including cancer (Peto et al., 2012). Recent statistics show that 20% of adults in the UK smoke (figure 1), with rates declining on average at 0.4% per year (Health and Social Care Information Centre, 2010).

Smoking statistics show a downward trend with a drop from 45% to 20% of adults smoking in the population since 1974. 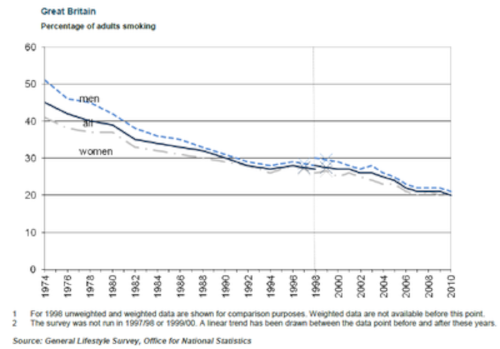 Tobacco smoke, in addition to other environmental factors such as stress, alcohol, pollution and drugs, have been shown to have a direct impact on the epigenetic modifications associated with DNA and histone proteins. As such, they have a direct impact on gene expression profiles and so are associated with predisposition to a number of multifactorial diseases including asthma and cancer.

Moreover, evidence also suggests that epigenetic modifications can be inherited from generation to generation so anything an individual is exposed to during their lifetime could have a detrimental impact on the health of their children and grandchildren, a phenomenon known as transgenerational inheritance. Parental smoking during the preconception period and pregnancy has been associated with an increased risk of hepatoblastoma and childhood leukaemia in offspring (Secretan et al., 2009) This emphasizes the significance of the preconception and in utero environment during development and how adverse exposures can impact both the growth and development of the foetus as well as the child’s postnatal health.