At the end of this case study, you should be able to:

Epigenetics is the study of heritable changes in gene expression caused by mechanisms distinct from the underlying DNA sequence i.e. it is caused my modifications to the genome that do not involve a change to the nucleotide sequence. This is most commonly achieved through DNA methylation although histone modifications such as acetylation, methylation and phosphorylation also play a role.

Unlike the genome that is largely static, the epigenome is dynamic and frequently responds to environmental cues and stresses such as exposure to chemicals, smoking, stress, diet and alcohol (Figure 1). Accumulating evidence suggests that there are epigenetic transgenerational effects meaning that environmental factors experienced by our ancestors may affect us decades later thus what someone does in their lifetime may have an impact on future generations. 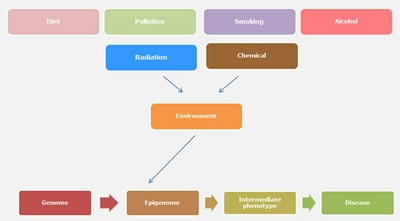 Modification of the epigenome can be achieved through a number of environmental factors which can directly contribute to disease initiation and progression. Everyday stresses such as pollution, alcohol and poor diet modify the epigenome, which in turn alters gene expression patterns by altering a gene's activity; this is normally a tightly regulated process so alteration of gene activity can contribute to pathogenesis of diseases.

Epigenetics and the in utero environment

Experts argue that the most critical period of human development is the 1000 days from pregnancy to a child’s second birthday, a period known as the 1000-day window (United Nations Standing Committee on Nutrition, 2010). This is emphasized through the discovery that the in utero environment that a foetus is exposed to can cause direct epigenetic effects in the foetus, resulting in the offspring being predisposed to a number of conditions including cardiovascular disease, diabetes, obesity and reduced lifespan.

One of the most noticeable examples of epigenomic change in response to the environment of this is restricted calorie intake during pregnancy or throughout periods of growth, for example during puberty, in both the mother and father; both of these directly impact the health of subsequent offspring through alteration of DNA methylation patterns. The mechanism that this is achieved by is not thoroughly understood but it is postulated that changing the availability of methyl donors or altering the activity of enzymes involved in the process of DNA methylation could be affected by nutritional status (McKay and Mathers, 2011).  Similarly, an unbalanced, high-fat, low-protein or energy-restricted diet can modify epigenetic marks, which are associated detrimental health effects in offspring in both animal and human models (Brait et al., 2009, van Straten et al., 2010, Widiker et al., 2010).