School of Media, Communication and Sociology

For Local Authorities to successfully implement national strategic objectives it is necessary for the different agencies involved to take a coordinated interdisciplinary approach and have available methods of implementation that work at a local level.

Public Health England (2020) has recently advocated that using local intelligence to inform suicide prevention is crucial to tackling the national problem and proposes that real-time surveillance models are useful in going forward. A real-time surveillance approach is a system whereby a particular agency considers and promotes the use of intervention where needed, provides or sources support for those bereaved by suicide, and such approaches are either led by the police of the coroner.

A practical model for suicide response and suicide prevention based on the real-time surveillance guidance of PHE, was created and implemented by Barney Thorne of Leicestershire Police, with support and assistance from the University of Leicester team in the UK. This model was designed for the operationalisation of national objectives by focusing on how one primary agency (the police) work with other local agencies to collate data, initiate support processes, and meet wider objectives. The foundational principles of the model are translatable for any local domain.

The model was iteratively co-created by engaging local inter-disciplinary knowledge and expertise from the police, mental health services, local authorities, charities and academics, utilising policy directives, evidence from research literature and local information and expertise. It is a systemic model in that it accounts for and recognises the importance of the systems around the person who has died. 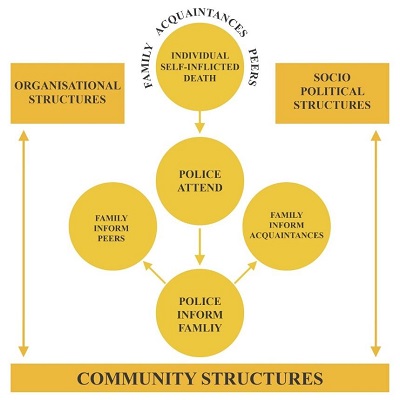 At the point of a self-inflicted death, the police collect information against 30 demographics, by filling in information on a spread sheet. Where the information is not available at the scene or from talking to people at the scene, it is followed up by talking to other agencies like the GP, the hospital and so on. The demographic recording part of the process creates a real-time surveillance data corpus, which provides a foundation for response and can facilitate mobilising action by the police and local agencies when they are needed.

During the second iterative phase of our model development, local implementation ideas were created and implemented through co-working with other agencies and sectors. This was achieved through a county and city-wide partnership pathway to support and inform families and communities after a self-inflicted death had occurred. This kind of extended local support framework is crucial. In the third and final iterative phase of the model, the impact on frontline professionals was recognised and we conducted a study, funded by the LIAS and Wellcome Trust interviewing a wide range of professionals, including the police.

This process is presented visually in our image. Those aspects in spherical shapes represent what was added in phase two and three. 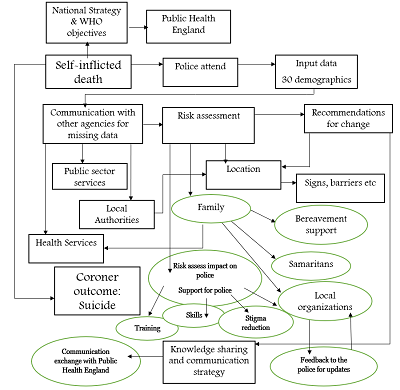 Using the model, the police were able to identify Citizens Advice, the Samaritans (and Harmless) and The Tomorrow Project to provide support, advice, and resilience over the coming years to those bereaved by suicide. Indeed, one mother self-referred to the Laura Centre for support (a Local charity who support bereaved parents).

The model includes a full information sheet which contains local sources of support, information about next steps, role of different agencies and so on, and this is handed to bereaved relatives soon after the death.

Sources of support for self-harm and suicidal thinking