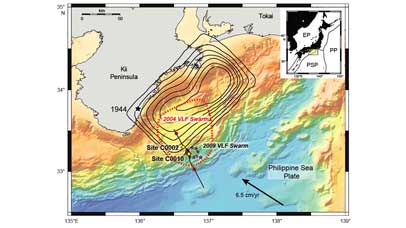 The Nankai Trough Seismogenic Zone Experiment (NanTroSEIZE) is a complex multi-year project that started in 2007 and that is still sailing expeditions along the southeast coast of Japan in 2019. Over more than a decade, this multiple-expedition project has attempted for the first time to drill, sample, and instrument formations from the seismogenic Nankai trough, a zone that has caused large-scale and deadly earthquakes and associated tsunamis throughout history. For this deep and challenging drilling, the D/V Chikyu allowed riser-drilling operations. Data collected during the several expeditions will help us to learn more about how and why earthquakes and tsunamis occur.

NanTroSEIZE has involved a total of thirteen IODP expeditions in three stages. For detailed information on scientific aims and results, see the individual expedition pages. 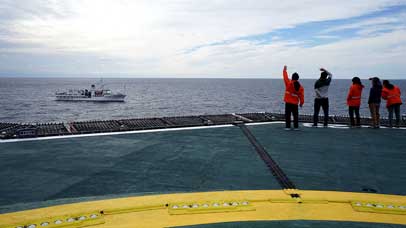 A total of 22 sites and 68 holes have been drilled in the Nankai trough area as part of the NanTroSEIZE project. This network of sites has so far enabled basin and accretionary-wedge scale characterisation of physical properties, lithostratigraphy, and geological structures; with the ultimate objective of reaching the underlying megasplay fault.

IODP Site C0002 includes the deepest hole drilled as part of the NanTroSEIZE project. In December 2018, Hole F at this site (C0002F) surpassed the record, becoming the deepest drilled hole in scientific ocean drilling. This site is the intended hole to access the megasplay fault that branches from the décollement.

For a detailed history of the NanTroSEIZE project to-date, see Kopf et al. (2017).

The most recent NanTroSEIZE Expedition, Expedition 358: Plate Boundary Deep Riser 4, was a 6-month expedition between October 2018 and March 2019. The primary aim of this expedition was to deepen Hole C0002F from 3000 mbsf down to the megathrust fault target at ~5200 mbsf. Logging-while-drilling (LWD) technology and cuttings analysis played major parts in recovering data from this extremely deep hole. To aid with this, experienced logging scientist were invited from the international IODP community to sail in shifts throughout the long 6-month window. In 2018-2019, IODP Research Associate Erwan Le Ber sailed as a Logging Staff Scientist with JAMSTEC during IODP Expedition 358.

As a Logging Staff Scientist, Erwan Le Ber is a co-author on the following expedition-related publications.