Archaeological research project on an ancient harbour and other Classical and Byzantine settlements at Akrotiri, Cyprus. A collaboration with the University of Southampton, UK Ministry of Defence and local communities.

Since 2015, teams of School and ULAS staff and students have conducted several seasons of excavation and survey on Roman/early Byzantine remains at Dreamer's Bay, Akrotiri, Cyprus. Comprising warehouse complexes, harbour works, and shoreline stone quarries, these attest an ancient port site inside the modern Royal Air Force base on the Akrotiri peninsula, at the southernmost point of Cyprus. The work is being conducted under the auspices of the UK MOD's Defence Infrastructure Organisation and Sovereign Base Areas Administration, which look after heritage sites inside the British Sovereign Bases on the island, and is with the permission of the Republic of Cyprus Department of Antiquities. 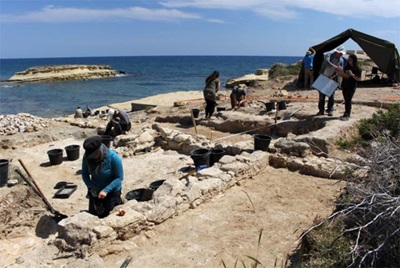 The project is directed by Professor Simon James, with Vicki Score of ULAS as field director. The excavation has featured on Forces TV in 2015 and 2018. It was runner-up in the Heritage Project category in the UK Ministry of Defence Sanctuary Awards for 2017. In September 2018, our maritime archaeology partner Dr Lucy Blue of the University of Southampton led an underwater survey in the adjacent ancient harbour. A further season of land excavation was undertaken in April 2019, and a second underwater expedition in September. The project also includes Cypriot students, and specialists, including Professor Stella Demesticha of the University of Cyprus.

The immediate reason for the work was that ancient port buildings on the shoreline are being eroded by wave action during winter storms. Urgent excavation was needed to document what will soon be lost. However, this work also creates an opportunity to pursue wider archaeological research objectives on the Akrotiri peninsula, a prominent feature of the Cypriot coastline.

The initial objective of the Ancient Akrotiri Project is to understand the Dreamer's Bay port, and place it in the context of the wider peninsula which lay between the major ancient cities of Kourion and Amathous. The Roman/Byzantine harbour at Dreamer's Bay appears to be part of an extensive but little-explored Classical to Late Antique settlement pattern on the former island, now linked to Cyprus by huge tombolo beaches. The longer-term objective, encapsulated in the project's name, is to explore the archaeology of the entire peninsual as a maritime cultural landscape. Numerous other sites are already known, at one of which Dr Eleni Procopiou of the Department of Antiquities is revealing a spectacular Byzantine church. The vital maritime aspect of the port and the region is being explored in collaboration with the University of Southampton's Centre for Maritime Archaeology and the PortusLimen Project.

Alongside its academic research objectives, the project is also intended to pursue the broader aims of the School in education, widening participation, outreach and knowledge exchange, through collaboration with other organisations. In particular, the outreach programme is intended to promote engagement with, and respect for, the archaeological heritage among both UK military and local Cypriot communities. It is intended that the heritage programme will help enhance good intercommunal relations. We are in close cooperation with both UK and Cypriot stakeholders, including the joint UK/Cyprus Akrotiri Environmental Education Centre, Akrotiri village council, the Western Sovereign Base Areas Archaeological Society, and not least RAF Akrotiri.

This project has been generously funded by the University of Leicester, the Council for British Research in the Levant, the Roman Society and since 2017 by the Honor Frost Foundation. We are also very grateful to the UK Ministry of Defence, especially the Defence Infrastructure Organisation, UK Sovereign Base Areas Administration and RAF Akrotiri for their strong support and assistance.