The Ancient Harbours of Ierapetra

Archaeological research project studying the ancient Greek and Roman harbours of Ierapetra, eastern Crete, and their coastal environment. A collaboration with the Laboratory of Geophysical - Satellite Remote Sensing and Archaeoenvironment of IMS-FORTH, Rethymno, Crete, in partnership with the Ephorate of Underwater Antiquities, the Department of Archaeology and Classical Studies at Wilfrid Laurier University, Ontario, Canada, and members of the local community of Ierapetra.

The Greek polis of Hierapytna grew to be one of the largest city-states on the island of Crete during the 3rd to 1st centuries BC and became an important harbour town during the Roman period. Today, above ground, there is little evidence that bears witness to this past grandeur and the site of the ancient harbours and traces of the surrounding ancient coastal landscape are masked by the modern town of Ierapetra. The actual location, size and entrance of the Roman harbour has been the subject of much debate and discussion over the years and after a discussion with the Ephorate of Underwater Antiquities an initial scoping survey was undertaken in October 2019 under the field directorship of Michael J Curtis, a PhD student at the School of Archaeology and Ancient History, working in association with the Laboratory of Geophysical - Satellite Remote Sensing and Archaeoenvironment of IMS-FORTH. 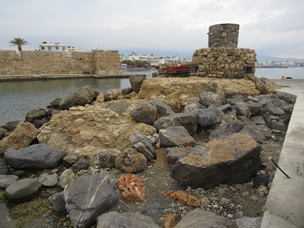 The initial objective of the archaeological field evaluation and scoping survey was to increase the understanding of the ancient harbour and its relationship in the modern landscape, and to help achieve these objectives a series of project aims were set:

The results of the survey demonstrated that the coastal landscape, both on land and underwater, was more complex than previously thought. Aided by information supplied by the local community it has been possible to present an initial overview of the development of the coastal landscape from the silting-up and abandonment of the Roman harbour in circa 4th century AD through to the present day. This is a landscape that is still threatened by natural and human interventions today, raising the importance and urgency of the project.

During the fieldwork, a previously unknown surviving section of Roman quay and an adjoining tiered beacon platform, that had been reused during the Second World War as a gun emplacement, was discovered and recorded using 3D Laser Scanning techniques. When checking early sketches of the promontory where the ancient harbour was located, it was possible to see that this formed part of the eastern quayside and that it had remained visible as feature in the landscape until at least the 17th century. Using historical data, including the accounts of early travellers, it has been possible to reconstruct the Roman harbour and identify its probable sea entrance.

An initial evaluation of the coastal landscape suggests that the Roman Imperial harbour suffered from silting, and which contributed to its demise. Over time the landward waterfrontage was subsequently buried beneath a linear sand bank, the line of which can still be traced in the modern landscape. The sand bank extended beyond the area of the harbour and along the western foreshore where the remains of Roman buildings are known to have existed. There are indications that this stretch of foreshore might have been an industrial area that was eventually separated from the Roman urban area by the construction of a town wall. This area is undisturbed, offering a unique opportunity for the preservation buried remains and Roman ground surfaces.

Publicity for the Ancient Harbours of Ierapetra project

The 2019 project featured on Cretan television and in the press inspiring the community of Ierapetra to delve into their personal and family photographic archives and facilitating the creation of a pictorial record of the changing seafront from as early as 1870 (within 20 years of Capt. T.A.B. Spratt’s 1851/2 Admiralty Survey which documented the remains of the Roman town that were still visible at this time) to the present day, including important information about the construction of the modern harbour, which partly lies on top of the Roman quays. Publicity about the project has also fostered a new interest in the history and archaeology of the town and its heritage.

The results of the initial scoping survey have raised a lot more questions about the harbour and the use of the adjoining foreshore during the Roman period. The lack of any visible evidence, to date, to support the premise that this was also the site of the harbour for the Greek polis is also interesting, especially as epigraphical evidence suggests that Hierapytna was engaged in maritime activities. Further work is being planned to continue the research along this stretch of the coastline.