Simply extracting the DNA from the remains wouldn’t tell us the identity of the individual. It requires comparing DNA from the skeletal remains with that of known relatives. Professor Turi King collected DNA samples from the living female-line and male-line relatives of Richard III and carried out the DNA analysis on those samples at the University of Leicester.

Removing a tooth for DNA analysis

The survival of usable ancient DNA depends less on the age of the remains than on the burial conditions. The best conditions for preserving ancient DNA are cold and dry. After careful excavation from the Greyfriars site, samples were taken from the skeleton and placed for safe-keeping in the clean room in the University’s Space Research Centre – normally used for the construction of spacecraft components – under the care of John Holt. Due to their preservation, teeth samples offered the best hope of intact DNA. In order to work on the ancient DNA, Professor King had to travel to two different ancient DNA labs to do the work: at the Université Paul Sabatier in Toulouse, Professor King worked in the lab of Dr Patricia Balaresque and Laure Tonasso; and the University of York Professor King worked in the lab of Professor Michael Hofreiter with Dr Gloria Gonzales Fortes (both now at the University of Potsdam). Professor King also wanted to see if it would be possible to genetically determine Richard III’s hair and eye colour. 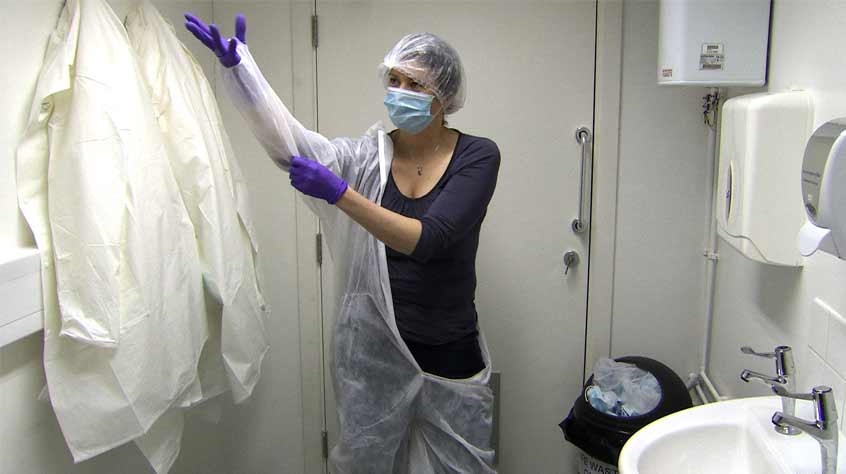 Professor King preparing to work in the ancient DNA lab.

DNA with simple patterns of inheritance: mitochondrial DNA and the Y chromosome

Mitochondrial DNA (mtDNA) is a segment of DNA which is passed down in the egg and so is transmitted by a mother to all of her children. Only daughters pass it on and therefore it is copied and passed through the female line with people being related through a female line link being expected to share an identical or near identical mitochondrial DNA type.

Cecily Neville, Richard’s mother, would have passed down her mitochondrial DNA type to all of her children. This means that Richard III and Anne of York inherited the same mtDNA from their mother - and as long as Anne’s daughter(s) had a daughter, who had a daughter (highly likely in an age when eight to ten children was common!) and so on, the mtDNA type (or a near identical type) will have been passed down those lines of descent. Michael Ibsen and Wendy Duldig are two such female-line relatives of Richard III.

Another advantage of mtDNA is that there are many copies of mitochondrial DNA within each cell. DNA starts to degrade after death but with so many copies of the mtDNA, this is the most likely piece of DNA which can be retrieved from ancient remains.

The Y chromosome has on it the gene which sets an embryo down the path to become a boy. It is therefore only passed down from a father to his son(s) and so on down through the generations. Richard III left no living descendants and so, in order to find male line relatives of Richard who should therefore have the same Y chromosome, it is necessary to travel up the tree to Edward III and then down through John of Gaunt to his male-line descendants, the Somersets. It would be expected that these living male-line relatives of Richard would share an identical or near-identical Y-chromosome type. However, it was known at the outset that this would not necessarily be the case: false-paternity events, where the biological father is not the person thought to be the father of the child, do occur. Professor King and others have looked at historical false-paternity rates and these are estimated to be at 1-2% per generation meaning that a break in the Y chromosome chain would not come as a surprise if found.

The results of the DNA analysis showed us the hair and eye colour of Richard III.

What we know now

What we've learnt since the discovery.