How old are the bones found under the Greyfriars church? Clearly they can’t be any more recent than the Dissolution of 1538. But if they are earlier than 1485, then they can’t be Richard’s remains.

Radiocarbon dating is a commonly used technique which relies on the fact that, although 99% of carbon atoms have six protons and six neutrons (carbon-12), about 1% have an extra neutron (carbon-13) and about one atom in a trillion has two extra neutrons (carbon-14). C-12 and C-13 are stable but C-14 decays at a known rate, with a half-life of 5,568 years.

University of Leicester archaeologists took four small samples from one of the ribs of the Greyfriars skeleton and sent them to two specialist units with the facilities to analyse them: the Scottish Universities Environmental Research Centre (SUERC) at the University of Glasgow, and the Oxford Radiocarbon Accelerator Unit, part of the University of Oxford’s Research Laboratory for Archaeology and the History of Art.

The small pieces of bone were combusted to produce carbon dioxide which was then put through a mass spectrometer. Testing two pieces each at two different facilities should provide consistent results – and indeed it did.

However, all was not lost. The proportion of C-14 in the atmosphere, and hence in living things, is not constant but varies over the centuries, and it also varies between the atmosphere and the oceans. Radiocarbon dating of marine organisms can be out by up to several hundred years, and this effect can occur to a lesser degree in terrestrial life where sea-food forms part of the diet.

The mass spectrometry of the Greyfriars bone samples reveals that the individual in question had a high-protein diet including a significant proportion of seafood. This would seem reasonable for a medieval nobleman, and certainly for a member of the royal family. 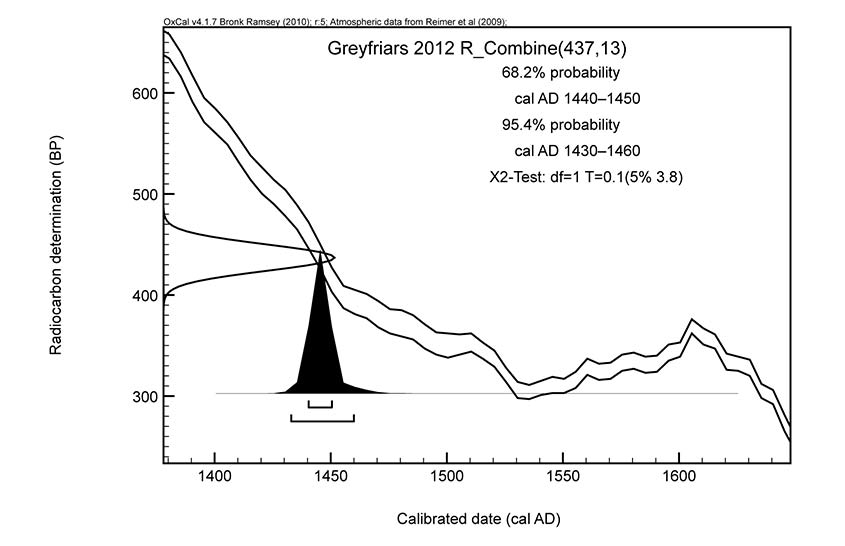 Allowing for this factor, and bearing in mind that the results cannot be later than 1538, a Bayesian statistic modelling technique gives the approximate date as AD1475-1530 (with a 69% confidence).

This does not, of course, prove that the bones are those of Richard III. What it does is remove one possibility which could have proved that these are not Richard’s remains. (And it also tells us something about what he had for supper.) 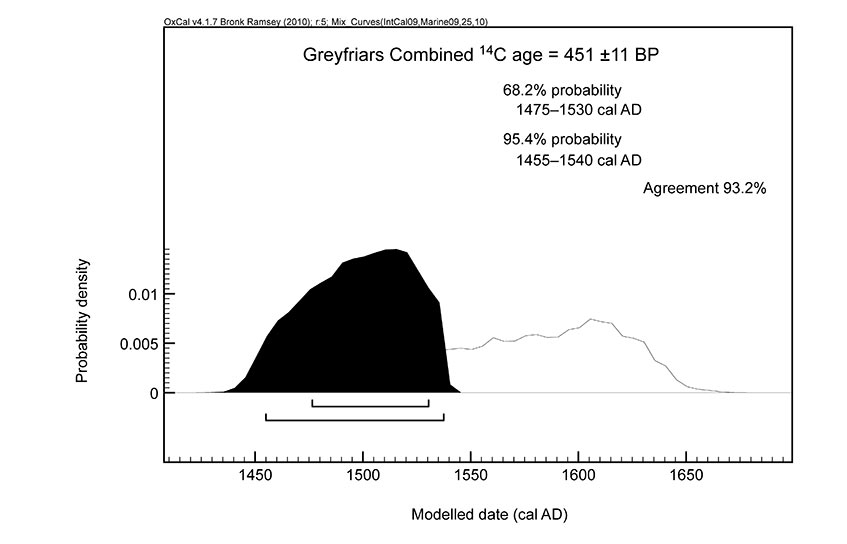 Further refined modelled date of mean Greyfriars 2012, after the application of Bayesian statistics to constrain the date of the burial to pre-Dissolution, before AD 1538 in this instance.

See more about the forensic and genetic analysis of the remains

How we used an advanced technique for the first time to analyse the bones.