Domestic camcorders can adjust themselves automatically to make very good recordings, even in inexperienced hands. However, to achieve good results it's helpful to understand a little about how the camera works and how you can best use it within its limitations. The following notes are intended to cover all the issues you'll need to understand.

The human ear and brain are excellent at pinpointing the directions from which sounds are coming, isolating the sounds which are of interest and ignoring other sounds such as traffic noise, other conversations and echoes within a room. The camcorder is far less discerning, drawing in sound from all around and appearing to amplify any unwanted noise. It is, therefore, essential to choose a location which is free from unwanted noise such as traffic, building work, sounds from nearby areas. When filming indoors, choose a carpeted room with plenty of soft furnishings to cut down echoes and be sure to close the windows.

Press the zoom control to the W (or wide) position until the lens has zoomed out fully to its widest angle of view. Position the camera as close as possible to the subjects whilst making sure that everything you want to see is included.

If the subject is a single person it is usually best to go no closer than 1 or 1.5 metres and to zoom in a little, in order to get an undistorted picture.

For filming, you should choose a well lit area - when indoors, either a room with good artificial lighting or one with large windows.

The camera needs to be adjusted to the brightness of the subject it's filming. Camcorders can be set to adjust themselves automatically - usually known as automatic exposure - but this can cause problems, as described below in the section on backgrounds. 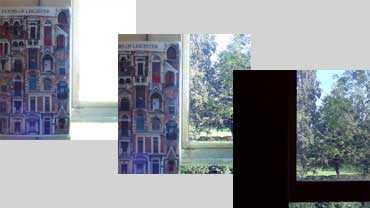 The human eye is much better than the camera at viewing scenes with strongly contrasting brightness. For instance, you can stand in a room and see a poster on an inside wall next to a window whilst at the same time being able to see a tree outside the window. A video camera could be adjusted to see the poster, but the outside world would be seen as a white blob, or it could be adjusted to see the tree, but the poster and the inside wall would be seen as black. If you try to film a person with light skin against a dark background, the camera will adjust for the background and the person may be too bright. Similarly, a dark skinned person against a white background may appear too dark. The solution is to:

Avoid bright or dark backgrounds and do not include lights or windows in the picture.

You can judge the effect through the camera's viewfinder.

Many camcorders give you the option of manual exposure which will allow you to compensate for the background.

Artificial light tends to be very orange compared to natural daylight. Once again, the eye and brain cope with this well and we rarely notice it, but for the video camera it is a problem. The white balance function on camcorders allows them to compensate and usually has "indoor", "outdoor", "auto" and manual settings. Although 'auto' is fallible it is probably best in most situations.

When you're filming brightly coloured objects or when you simply want to ensure the most accurate results you should avoid mixing artificial light and daylight and you should set the white balance manually.

Camcorders have automatic focus but some also have the option of manual focus. Automatic focus can cause problems by adjusting itself unexpectedly and making your recordings look fuzzy. Manual focus will remain fixed but needs to be set accurately.

Use manual focus if you have the option. To set the focus, zoom the lens in fully by holding the zoom switch in the T for Telephoto position. Point the camcorder at the object you want in focus. Set the focus either by adjusting the focus ring or by switching to auto focus until the focus is set and then switching back to manual focus. Zoom out again to set the lens to the composition you want.

Focus problems are often hard to spot with the low resolution viewfinders on camcorders - especially with colour LCD screens. Auto focus will tend to focus on the centre of the image while objects of interest - especially people - are often at the sides of the shot. With manual focus you can be confident that, as long as you don't move the camera nearer or further away, your object of interest will stay in sharp focus.