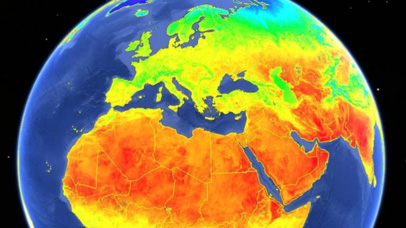 The Surface Temperature Group at Leicester has a strong heritage in leading space research with the European Space Agency, and the European Commission. There is a strong involvement with Copernicus Sentinel satellites and increasingly with the Copernicus Services. Studies of the ATSR and Sentinel-3 missions are key projects in the Leicester surface temperature team. The team have been particularly concerned to support algorithm developments, assess data quality and analyse long-term time series of surface temperature, primarily for the land but also over ice and sea. The team has been fundamentally involved in the early specification and developments towards one of the new Copernicus mission: Land Surface Temperature Mission (LSTM).

The surface temperature team at Leicester specialises in retrieval, validation and exploitation of LST, both the products from Earth Observation and the simulations of land-surface models; the interactions between the land-surface and the atmosphere; and climate feedbacks on various spatial and temporal scales including the evaluation of land-surface models and constraining their estimation of hydrological fields through data assimilation. The team leads all LST activities for Sentinel-3 and are the Prime on the ESA LST CCI Project. Other projects include: leading on the science study for LSTM mission, leading the LST component on the Copernicus in situ service, and running the Project Office for GHRSST.