Fieldwork: from the frozen north to the savannah… and a Leicester car park 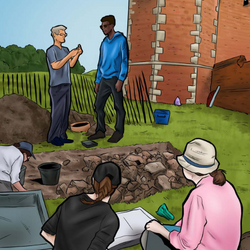 There’s no substitute for seeing how learning works in real life, and Leicester has long provided an extraordinary range of opportunities for staff and students from nearly every subject. On its doorstep and as far and wide as Africa’s Rift Valley and Greenland.

Our fieldwork made it to the world stage when University archaeologists were involved in the discovery of Richard III below a car park in the city.

Fieldwork has been central from our beginnings. Even before the University College first opened its doors, a garden of interesting and rare plants was being planned. Opened in 1925, this gave botany students practical experience on site.

Trips to the coast were arranged for zoology and botany students in the 1930s, sometimes with the young David and Richard Attenborough tagging along.

Our geologists documented their 1950s field trips in colour film – which has survived. Education staff and postgraduates toured in West Africa in 1977.

Tim Brown, who studied zoology, took part in an expedition to East Greenland in 1961.

That was magic… Beautiful, beautiful fjords… We did mountain climbing… a lot of specimen collecting. We helped the scientific programme.

“That was magic… Beautiful, beautiful fjords,” he remembers.

“We started off by not being able to land because the runway wasn’t frozen… When we got there we had a clinker-built dinghy that leaked like a sieve and a rubber Avon Redcrest – both had motors on the back and, after the time we’d been there, we’d done over 1,000km on these boats.

“We did mountain climbing… a lot of specimen collecting. We helped the scientific programme.”

Fieldwork equips students with skills above and beyond their area of study. Since the millennium, archaeology field schools have been held every year at Abbey Park, which holds the remains of a 12th century abbey, and Bradgate Park, a medieval deer park. Here, students learn not only about their discipline but also about event organisation and public outreach.

A major area of fieldwork involves the East African Rift – one of the principle tectonic structures on the surface of our planet. Leicester’s East African Rift Geophysical Research Project has been operating there for nearly 60 years, collaborating with numerous universities and other organisations from Africa and around the world.

In the Rift Valley, students – undergraduate and postgraduate – are able to work on data for their projects almost as soon as the data becomes available.

In the field in Africa, students gain intellectually, mixing with and learning from global students and scientists, while experiencing marvellous adventures they will remember forever.