Antibiotic resistance for schools and colleges

Antibiotics are molecules that kill or inhibit the growth of bacteria and are used to treat bacterial infections. Bacteria can mutate to become resistant to antibiotic treatment.

Perhaps the antibiotic you'll be most familiar with is penicillin.

Penicillin was discovered by a microbiologist called Alexander Fleming in 1928, when he allowed some of his petri dishes to get contaminated by a fungus. He saw that the bacteria around where the fungus had grown, had all been killed (the diagram below shows a similar thing), implying that some component of the fungus has antibacterial properties.

In the following years, scientists were able to isolate the molecule responsible for inhibiting the growth of these organisms, which was identified as the antibiotic penicillin. Penicillin was then used to treat thousands of infections in the second world war. In the following decades, the world of medicine exploded with hundreds of new antibiotics, and we enjoyed a golden age where most bacterial diseases could be treated relatively easily.

Antibiotics are drugs used to treat infections caused by Bacteria.

How do they work?

There are hundreds of chemical process going on in bacterial cells to keep them alive and multiplying. These include: cell wall biosynthesis, DNA replication and protein synthesis. Antibiotics work by blocking key components of these processes.

For example: Aminoglycosides are antibiotics reserved to treat very serious infections caused by Gram-negative bacteria. Aminoglycosides work by binding to a component of the bacterial ribosome, inhibiting their action. This prevents bacteria from producing proteins essential to their survival.

Antibiotics work by blocking processes that are essential to bacteria's life cycle.

How does antibiotic resistance develop?

Antibiotic resistant bacteria are those that cannot be killed by antibiotics that were previously effective. In some cases bacteria may be only resistant to one antibiotic, but increasingly bacteria are resistant to multiple different classes of antibiotics, making treating bacterial infections all the more difficult. Bacteria can acquire resistance in two ways. Firstly they can take up antibiotic resistance genes through horizontal gene transfer. This is particularly worrying as cells can 'trade' these genes with other nearby cells, speeding up the spread of resistance. Bacteria can also get mutations that change their existing genes to make them more efficient at dealing with antibiotics.

Improper use and the spread of antibiotic resistance

Bacteria are constantly mutating and acquiring new genes through HGT. Therefore, at any one time a bacterial population may contain a cell that is resistant to antibiotic treatment. Incorrect and widespread use of antibiotics amplifies the spread of resistance by killing off non-resistant cells, allowing resistant cells to dominate.

Incorrect use in by doctors and in hospitals

In previous years, penicillin and other commonplace antibiotics would often be prescribed to treat routine conditions such as a cold. Many of these conditions can in fact be caused by viral infections. Using antibiotics to treat an infection that may not be caused by a bacterium increases the chance that antibiotic resistant bacteria will be selected for and allowed to grow. 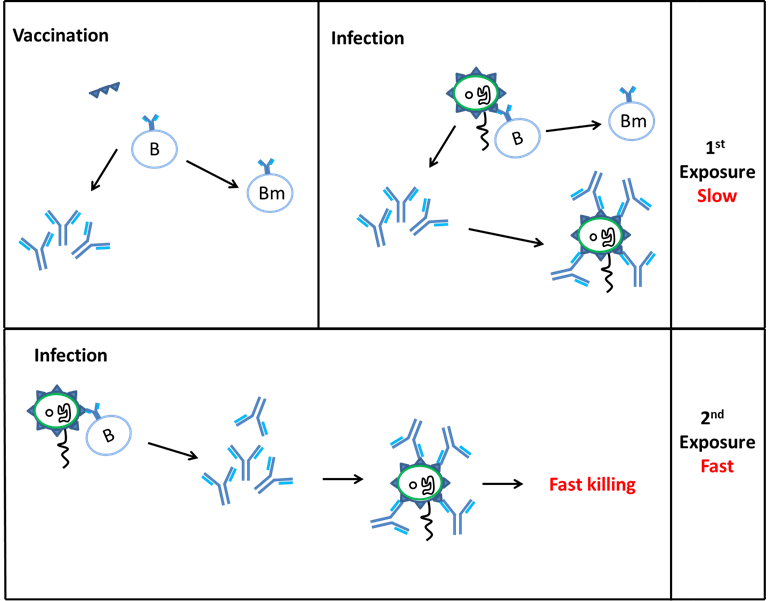 Improper use in industry

Use of antibiotics can speed up the growth of animals and plants. As a result, in the past (less so in recent years) antibiotics have been used as growth promotants in livestock and agriculture. Antibiotics are relatively cheap, and using them to treat livestock can often increase the net profit for farmers and agricultural companies. The downside is that by using antibiotics in this context, we amplify the number of resistant bacteria. These resistant cells in livestock can then spread their resistance to human pathogens, speeding up the spread of resistance even further.