Gene mutations and cancer for schools and colleges

Mutations are a change in the DNA of an organism. These mutations can take the form of insertions, deletions or substitutions. Mutations can result in a change in amino acid composition of a protein or make no change to the protein sequence.

As we learned on the DNA, genes and chromosomes page, DNA is made up of four different nucleotide bases; Guanine (G), Cysteine (C), Thymine (T) and Adenine (A). When genes are transcribed and translated, nucleotides are read by the ribosome in groups of three. We call these groups of three, codons. Each codon contains information mapping to a single amino acid. Codons are read one after the other by the ribosome to assemble amino acids in the correct order to synthesise a functional protein.

You may think that DNA replication and DNA repair are entirely fool proof processes. This is not the case, and the machinery responsible for these processes often maker mistakes which can lead to changes in the DNA sequence (mutation). Below are some of different types of mutation we can get in our DNA.

Insertion mutations occur when an additional base is added into the DNA sequence. If a single nucleotide is inserted (not a pair), the molecule is unstable as it doesn't have a partner base on the opposite strand. When DNA is copied by semi-conservative replication, one strand will incorporate the insertion mutation by synthesizing a complementary nucleotide. When the cell divides, the result is two daughter cells, one with the wild type DNA, and one carrying the insertion mutation. It is also possible that both nucleotides forming a complementary base pair may be inserted as well. In this case both daughter cells will carry the mutation.

The same principle applies for deletions and substitutions. If a base is accidentally deleted or swapped, when the strand replicates, the deletion/substitution will be introduced into the newly synthesized DNA molecule and passed down to the daughter cells.

The diagram above shows the different types of mutations that can occur in DNA. For simplicity, we have only shown one strand of DNA. When bases are deleted, inserted or substituted, this mutation is introduced into the genetic code when the DNA is replicated. *Note - insertions and deletions of larger pieces of DNA also occur in many bacteria, but single nucleotide changes are common in all cells of all species. 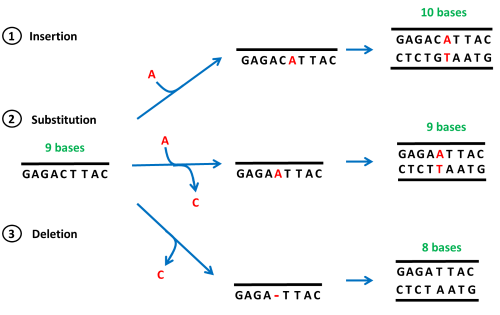 You can see on the Gene expression and regulation page and in the first paragraph of this page that DNA is read in sets of 3 based called codons. These consecutive, non-overlapping codons form what is known as the reading frame. Reading frames are recognised by ribosomes and used to built up complex protein molecules.

DNA deletions and insertions cause shifts in the reading frame of a piece of DNA. Both introducing an additional nucleotide and deleting one will cause each set of three down stream of the mutation to be read differently. Ribosomes will not read a codon with 2 bases (deletion) or 4 bases (insertion) instead they will read a frame shifted piece of DNA. 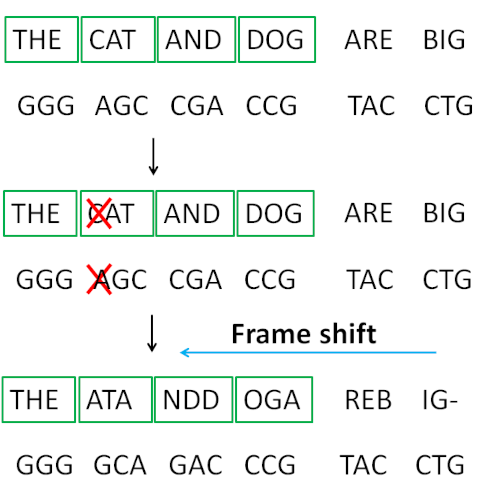 Non-synonymous mutations (altered protein structure) are often associated with genetic disease. The importance of even single nucleotide mutations cannot be ignored in genetic disease. Over 4000 human disease are caused by mutations in just a single gene. Cystic fibrosis for example can be caused by a single base mutation in the gene coding for the CFTR protein.

Cancer is also a disease caused by mutation. Read more about the genetics of cancer development here.