Cancers are responsible for millions of death every year. The study of cancer biology is therefore one of the largest areas of scientific interest. Cancer cells develop specific hallmarks through a series of mutations in both oncogenes and tumour-suppressor genes. There is no definitive cure for cancer, the majority of cancer treatments serve to prolong the lives of cancer sufferers.

Cancers are an enormous burden on human health, with the world health organisation (WHO) estimating roughly 8.2 million deaths attributed to these diseases every year. Cancerous cells replicate uncontrollably, free from the failsafe mechanisms of the body. Large masses of cancer cells are known known as tumours. These tumours can be either benign, which are less dangerous and rarely invasive, or malignant. Malignant tumours are invasive, cancerous and can spread to other parts of the body. Cancerous cells can be defined by several behaviours, known as the 'hallmarks of cancer'. These hallmarks develop following a series of mutations in key genes.

The hallmarks of cancer

The two types of genes involved in the development of the hallmarks of cancer are oncogenes and tumour-suppressor genes. 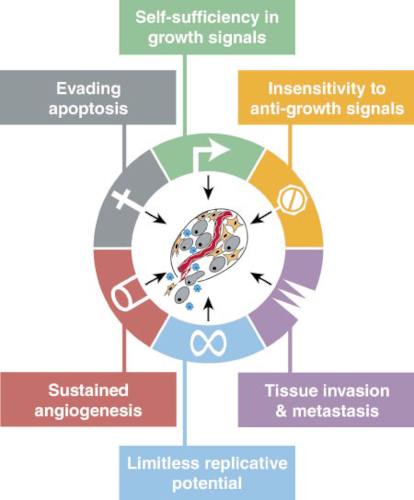 The hallmarks of cancer

Above - the hallmarks of cancer by Hanahan and Weinberg (2000)

Proto-oncogenes encode proteins with regulatory roles in the cell. These functions include progression through the cell cycle, and establishment of cellular adhesion. Mutations in proto-oncogenes can convert them into oncogenes. Oncogenes drive the development of cancers, by amplifying the signalling roles of proto-oncogenes. An example of a key oncogene is src. The protein product, Src, is involved in a variety of downstream signalling activites, regulating several key functions including: cellular survival, passage through the cell cycle and cellular migration. Mutations in the src gene lead to its constitutive activation, and subsequent constitutive signal transduction.

A comprehensive review of the src pathway and cancer can be found in the article by Chen et al. (2012)

Wild type tumour-suppressor genes are responsible for preventing the progression of cancer. p53 is perhaps the most diverse TSG serving a variety of functions, giving it the colloquial title 'the guardian of the genome'. p53 is a nuclear, phosphoprotein active as a tetramer. When activated, it serves as a transcription factor, regulating expression of several tumour-suppressing functions. It also regulates expression of the protein mdm2, which inhibits p53, forming a negative feedback loop. p53 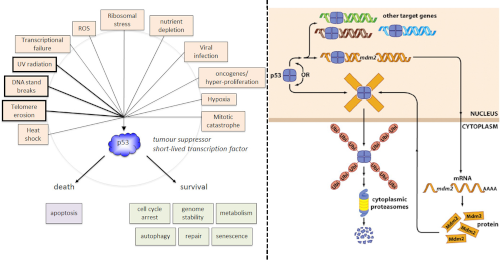 Above - pretty much every activity of the cell is under the control of p53 in one way or another. p53 responds to stresses to regulate transcription of key genes which prevent cancer development downstream. Diagrams taken from Loughery and Meek (2013).