Developmental genetics is the study of the way in which genes control the growth and development of an organism throughout its life-cycle. A newly fertilised egg cell - or zygote - contains a unique collection of genes that will control its development from a single cell into an embryo through patterns of differential gene expression in the process of embryogenesis. 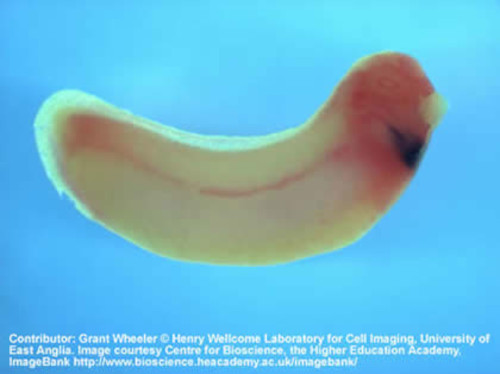 An embryo of the African clawed frog (Xenopus laevis) treated to show the expression of two genes. Messenger RNA for a gene called Frizzled7 (stained red) is found in the head and in a line down the trunk of the embryo. The gene Nkx2.5 (dark blue) is expressed in the heart of the embryo.

Creating an organism from a single cell involves three processes:

Genes control patterns of cell division and cell death (apoptosis) in the developing embryo. Genes also control the differentiation of cells from an original totipotent state (able to make all cell types) through a pluripotent state (able to make some cells types, like stem cells) to their final destination as specific cell types or cell lineages (cell determination).

Cells differentiate into different types of cells because of differential patterns of gene expression. Genes may be activated or inactivated ('silenced') by regulation of the processes of transcription and translation. See Gene expression and regulation for more details.

The basic three-dimensional layout of the body plan is established early in development: anterior and posterior, dorsal and ventral. A group of very similar genes - homeobox genes - have been found to regulate the process in fungi, plants and animals. Homeobox genes contain a specific nucleotide sequence, the homeobox region, which is about 180 nucleotides long. The homeobox produces a collection of transcription factor proteins (the homeodomain) that acts with other transcription factors to produce a cascade of gene activation and inactivation.

The homeobox genes responsible for segment identity during the formation of metazoan organisms are called homeotic genes, and mutations in these genes (homeotic mutations) can cause large disruptions to the body plan. For example, the Antennapedia mutation in the fruit fly (Drosophila melanogaster) causes legs - not antennae - to develop on the fly's head. In vertebrates, one particular subgroup of homeobox genes - the Hox genes - control the development of the limbs and other body parts.