The cell cycle, mitosis and meiosis for schools and colleges

Living cells go through a series of stages known as the cell cycle. The cells grow, copy their chromosomes, and then divide to form new cells.

The period between cell divisions is known as 'interphase'. Cells that are not dividing leave the cell cycle and stay in G0.

Mitosis is used to produce daughter cells that are genetically identical to the parent cells. The cell copies - or 'replicates' - its chromosomes, and then splits the copied chromosomes equally to make sure that each daughter cell has a full set.

Your body contains trillions of cells (thousands of millions). But you started life as a single cell - a fertilised egg cell. This cell then divided and divided to make more cells through a process called mitosis.

In mitosis a cell divides to form two identical daughter cells. It is important that the daughter cells have a copy of every chromosome, so the process involves copying the chromosomes first and then carefully separating the copies to give each new cell a full set.

The process of mitosis involves a number of different stages. 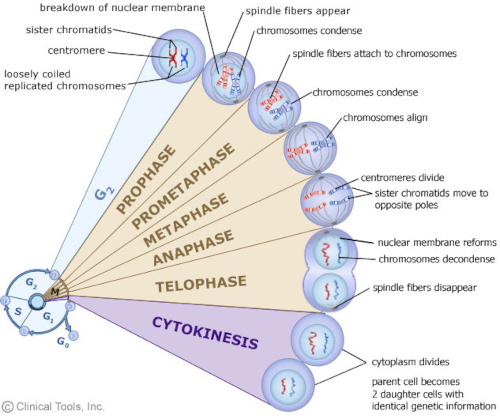 Some simple organisms - such as bacteria - can reproduce by simply dividing into two new individuals. Other organisms, including human beings, reproduce through sexual reproduction. New individuals are formed by the joining together of two special cells: a sperm cell and an egg cell.

The cells in our bodies contain 23 pairs of chromosomes - giving us 46 chromosomes in total. Sperm cells and egg cells contain 23 single chromosomes, half the normal number, and are made by a special form of cell division called meiosis.

Meiosis separates the pairs of matching (or 'homologous') chromosomes, so that sperm cells and egg cells have only one copy of each. That way, when an egg cell fuses with a sperm cell, the fertilised egg has a full set: that is, two copies of every chromosome.

Meiosis I separates the matching - or 'homologous' - pairs of chromosomes.

Meiosis II divides each chromosome into two copies (much like mitosis).

In Meiosis I, each daughter cell receives a mix of chromosomes from the two sets in the parent cell. In addition, the chromosomes in each matching pair swap some genetic material before they are parted in a process called crossing over. These processes produce new combinations of genes in the sperm cells and egg cells.