60 Years of Space at Leicester

Mars, the red planet, has always had a special fascination for us. It is our nearest celestial neighbour apart from the Moon and Venus, and it is more Earthlike than any other planet. Yet it has a painfully thin atmosphere and no seas or even lakes; the climate is bitterly cold, making it impossible for advanced life-forms of our type to survive there in natural conditions.

Our first Martian missions, such as the Vikings, were magnificent – but they were very limited. The Moon had to be our first target because it is so close, cosmically speaking; the there-and-back trip covers less than a million miles, whereas Mars never comes much closer than 35,000,000 miles and an actual journey is bound to take several months. A 21st Century rocket has to follow a roundabout route. However a Martian Base would be immensely valuable, and reaching Mars would necessitate full international cooperation – a point to which I will return later. The only other world within what we call reasonable range is Venus, which is overwhelmingly hostile. No astronaut would be enthusiastic about visiting a planet with a crushing atmospheric pressure, an intolerably high temperature, and clouds rich in deadly sulphuric acid.

My personal view is that the pioneer astronauts will not go directly to Mars, but will “stop off” at Deimos, the outer and smaller of the two tiny satellites discovered by Asaph Hall in 1877; using my 15-inch reflector I can just glimpse them, as tiny points of light, when Mars is best placed for observation. As it is less than ten miles in diameter; its gravitational pull is negligible and landing there will really be what we would call a docking operation. I select Deimos rather than Phobos, the inner satellite, which is only slightly larger, and for some investigations would be inconveniently close to the planet’s surface. Deimos can be used as a natural space-station – as if it were put there specially for our convenience!

Once on Mars itself, the first thing to do will be to construct a proper base. This is bound to take time, but once it is operational the value of the whole programme will quickly become obvious. Medical science, for example, will benefit immediately, as delicate operations immensely difficult on Earth will be much easier on Mars, where the gravitational pull is only one-third as strong. There is no need to stress the advantages of the Martian Base as a physical and chemical laboratory, and as an astronomical observatory it will be unrivalled. Geology too – we are still rather uncertain about the interior and the past history of Mars.

But to me there is another aspect, which is too often overlooked. It is possible that America or Russia might set up a base on the Moon in the foreseeable future; they might combine, because their “space race” is more or less over but it is conceivable that they could go independently of each other. A new nation has now entered the area, China, whose progress during the last few years has been striking. A journey to Mars is far more difficult than reaching the Moon, and establishing a Martian Base far more difficult and dangerous than developing a Lunar Base. If we are to attempt it, all nations – and I mean all – must be involved. It is possibly the one project attractive enough to unite all the space teams and if this does happen it could lead on to a really united Earth.

Of one thing I am certain: if a Martian Base becomes a reality it will be genuinely international, and space races will have been consigned to history. I hope that this will happen; the choice is ours. So – onward to Mars. It was named after the God of War, but to us it may prove to be the Planet of Peace. 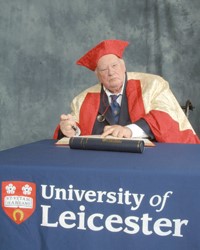 Sir Patrick Moore and the University of Leicester