One compelling aspect of Shakespeare’s Richard III is his deformity. In the play the king is described as ‘hunchbacked’ and there has been considerable disagreement since whether this is real or a politically motivated invention of his enemies.

A very pronounced curve in the spine was visible when the body was first uncovered. As well as this, evidence of scoliosis can be seen in many of the individual vertebrae. The appearance of these bones should be symmetrical, but many of the vertebrae had abnormalities in their shape.

The type of scoliosis seen here is known as idiopathic adolescent onset scoliosis. The word idiopathic means that the reason for its development is not entirely clear, although there is probably a genetic component. The term adolescent onset indicates that the deformity wasn’t present at birth, but developed after the age of ten.

Contemporary descriptions of the king describe him as having ‘unequal shoulders, the right higher and the left lower’. This is comparable with the presence of right-sided scoliosis. Reconstructing Richard III’s spine from CT scans shows that the curve was well-balanced with an angle in the range of 70-90°. Today this is considered a large curvature and many with the condition undergo surgery to stabilise it.

However, the physical disfigurement from Richard’s scoliosis was probably slight. His torso would have been short relative to the length of his limbs, and his right shoulder a little higher than the left. However, a good tailor and custom-made armour could have minimised the visual impact of this. A curve of 70–90° would not have caused impaired exercise tolerance from reduced lung capacity, and there is no evidence that Richard would have walked with an overt limp, because his leg bones are symmetrical and well formed. 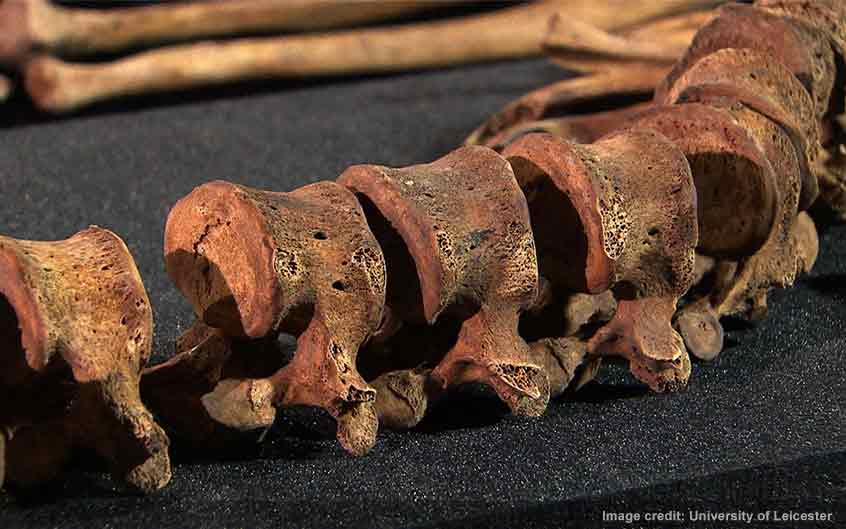 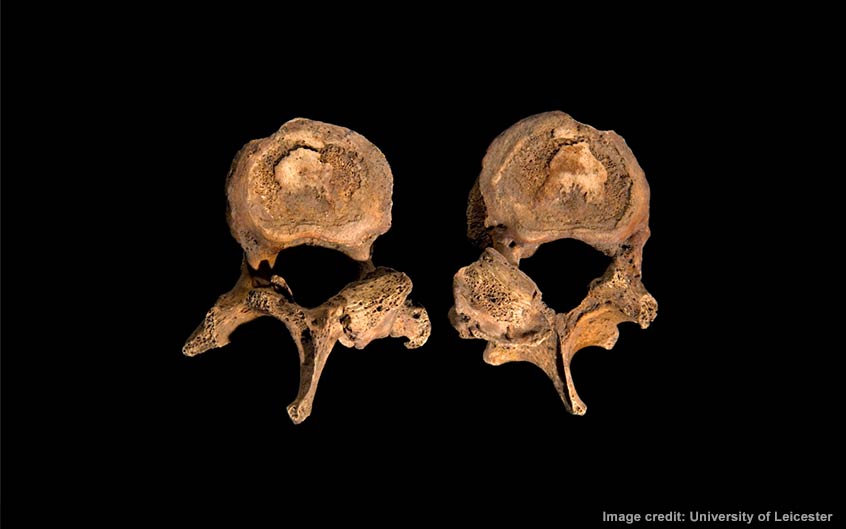 Two vertebrae showing some abnormal features relating to the scoliosis. The spinous processes of the vertebrae (pointing down), which should be straight, are twisted to one side. The joints between vertebrae show signs of osteoarthritis.

See more about reading the bones and Richard III's injuries

At least eleven injuries have been identified, all of which happened at around the time of death.