An extraordinary discovery by a team of palaeontologists, published in Nature, potentially rewrites our understanding of how dinosaurs lived. The team, including Dr David Unwin from the University of Leicester’s School of Museum Studies and led by Dr Unwin’s former PhD student Dr Ibrahim Nazir, now at the University of Detroit Mercy, have identified the first ever evidence for an aquatic dinosaur.

As any dinosaur enthusiast will tell you, dinosaurs all lived on land. The air-breathing creatures inhabiting the seas, rivers and lakes of that era were reptiles such as plesiosaurs, ichthyosaurs and early crocodiles. An old theory that large sauropods such as Brontosaurus spent most of their time in water has long been discredited. But a recently uncovered skeleton of a giant Spinosaurus reveals a huge, powerful, finned tail. Spinosaurus, it seems, was a swimmer – and a good one at that.

Spinosaurus aegyptiacus was a massive theropod dinosaur, 15m nose to tail, which achieved some popular awareness through its starring role in Jurassic Park III (though that version should not be considered scientifically accurate!). It is the largest known species in the spinosaurid family, which also includes Baryonyx, a slightly smaller dinosaur whose remains have been found in Britain. It is evident from their teeth that spinosaurids’ principle diet was fish but it was assumed that they hunted by stalking around the edges of rivers and lakes, grabbing unwary fish like a (very large, prehistoric) heron.

Until a few years ago, Spinosaurus aegyptiacus was only known from a few assorted fragments and the surviving records of a specimen uncovered in Egypt in 1912, which was displayed in a museum in Munich until it was unfortunately blasted to pieces by the RAF in April 1944. However a new, largely complete specimen was discovered in Morocco in 2008 and formally described in 2014. Subsequent expeditions have uncovered more of the skeleton, revealing adaptations – such as the position of its nostrils on top of its snout – which suggest it spent some time partially submerged. 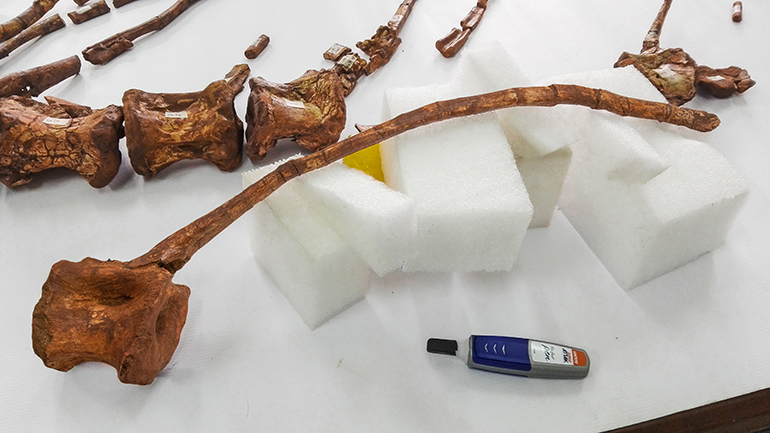 But how did Spinosaurus, an animal most notable for its enormous dorsal fin, propel itself through the water? One theory proposed was that it paddled itself around, possibly using webbed feet. But the description of the newly uncovered tail, which is quite unlike that of any other known dinosaur, completely changes our understanding of how Spinosaurus moved. Not only was there a large, strong fin all the way along the animal's tail, but the shape of the vertebrae allowed for much more lateral movement than in standard theropods such as T rex, whose tails tended to be relatively straight and stiff.

This looks like a fairly unambiguous adaptation to a largely aquatic lifestyle, something previously unknown in dinosaurs. In contemporary terms, it is analogous to the difference between a dog (which can swim if it needs to) and an otter (which spends most of its waking hours in the water, and is adapted to do so).

To test this theory, researchers at Yale University constructed a plastic version of the Spinosaurus tail and attached it to a robotic drive shaft in a water tank, using sensors to measure its thrust and efficiency. This was compared with five other plastic tails, constructed to proportionate size: those of the land-based theropod dinosaurs Coelophysis and Allosaurus, a crocodile’s tail and the tail of a crested newt, plus a rectangular control tail. 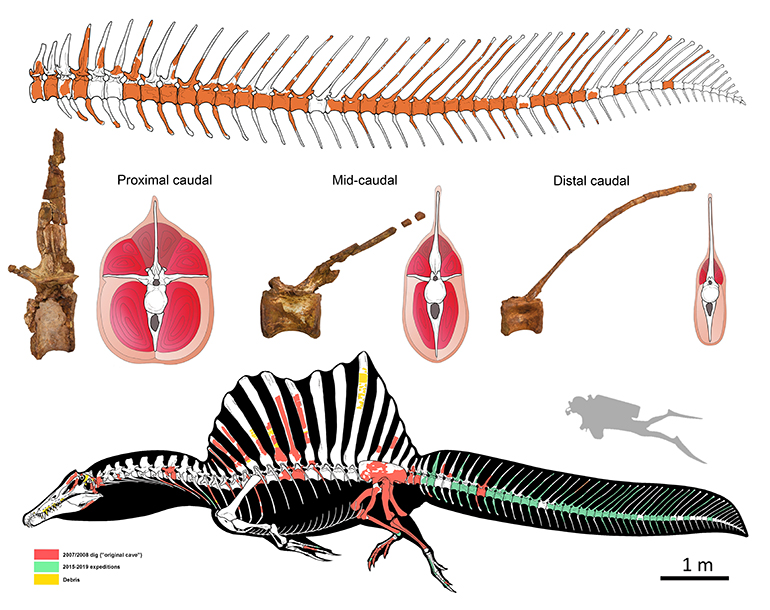 “This is a remarkable discovery that fundamentally changes our understanding of Spinosaurus. It was actually an aquatic hunter-killer that lived in the water,” said Dr Unwin.

The existence of an aquatic dinosaur species is a paleontological game-changer, potentially as significant as Archaeopteryx. Expect further research into other theropod species – starting with related spinosaurids like Baryonyx – as palaeontologists examine tail bones in collections across the world with a new eye, looking for evidence of similar adaptations.

Move over, aquatic reptiles – the dinosaurs are coming