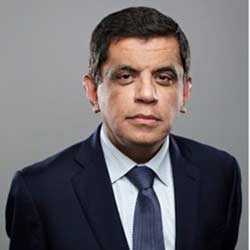 Nilesh Samani is Professor of Cardiology at the University of Leicester and Honorary Consultant Cardiologist at the Cardiac Centre, Glenfield Hospital, Leicester. He is also Medical Director of the British Heart Foundation.

Professor Samani was Head of the Department of Cardiovascular Sciences at the University between 2003-2016. He was also Director of the Leicester National Institute for Health Research (NIHR) Biomedical Research Unit in Cardiovascular Disease between 2009-2016.

Professor Samani was born in Kenya and moved to the UK in 1971. He was amongst the first intake of medical students into the Leicester Medical School graduating in 1981. Professor Samani’s clinical practice is in adult cardiology.

Professor Samani’s research interests are focused around elucidating the inherited basis of common cardiovascular diseases, especially coronary artery disease and high blood pressure, and in understanding the role of biological aging in age-associated diseases. He has authored over 600 papers and is one of the most-highly elucidating cited researchers in the world.

He has earned numerous national and international awards, including the NHS Platinum Clinical Excellence award, the Mackenzie Medal of the British Cardiovascular Society and the Okamoto award of the Japanese Circulation Foundation.

For his contribution to and standing in the community, Professor Samani was appointed a Deputy Lieutenant of Leicestershire in 2010. He was knighted in the 2015 New Year Honours List for services to medicine and medical research.