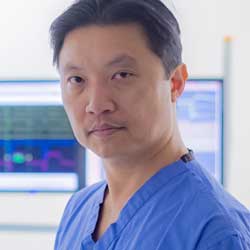 Professor André Ng, Head of the Department of Cardiovascular Sciences, has revolutionised the way heart treatments and procedures are done.

Professor Ng is an expert in the management of cardiac arrhythmias especially in catheter ablation and the use of mapping systems in such procedures. He was appointed as Senior Lecturer in Cardiology at the University of Leicester in 2002 and Consultant Cardiologist and Electrophysiologist at the University Hospitals of Leicester and was awarded Personal Chair in Cardiac Electrophysiology in 2013.

He has played a key role in the establishment of an active ablation programme for Atrial Fibrillation since 2002 at Glenfield Hospital and has pioneered the use of a novel robotic system in AF ablation. He has provided proctorship for new ablation technologies at many centres worldwide. He also specialises in advance device implantation including pacemakers, implantable cardioverter defibrillators and cardiac resynchronisation therapy (CRT) devices.