It was with great sadness that the University has learned of the death of Emeritus Professor Eric Dunning. 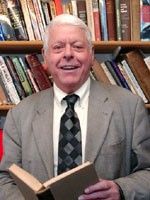 Eric was a pioneer in the sociology of sport and the founder, with Patrick Murphy and John Williams, of the Sir Norman Chester Centre for Football Research.

A graduate of the Universities of London and Leicester, he taught extensively in the USA, Canada, Brazil, Argentina and continental Europe.

Eric’s first publication in the sociology of sport was an article entitled ‘Football in its Early Stages’, which was based on his MA thesis and which was published in History Today in 1963.

Along with Norbert Elias, he was one of the pioneers of the sociological study of sport and leisure, having worked in the field since 1959. He has also looked at the problems of violence and civilisation, especially sports-related violence authoring or editing some 14 books in total.

His book entitled Norbert Elias and Modern Sociology was based partly on Dunning's personal experience working with Elias for more than three decades: Elias is now regarded as one of the most important and prescient social thinkers of the twentieth century. The book, co-authored with Professor Jason Hughes, was published in 2012.

Professor Hughes said: “Eric is a huge loss to Leicester and to the discipline of sociology. A founding figure in the sociology of sport and figurational sociology, Eric was pivotal to establishing Leicester as an internationally-reputed centre for work in the discipline; his work was groundbreaking and remains widely cited to this day. Eric was an inspirational teacher combining immense personal humility with encyclopaedic knowledge of the social sciences. He was a tremendously warm and generous man with a lively sense of fun and a lust for life. He will be sorely missed by numerous colleagues at Leicester, and indeed the many across the globe who are fortunate enough to have known him. His intellectual and personal legacy will live on for many years to come”.

A tribute to Professor Tony Gershlick