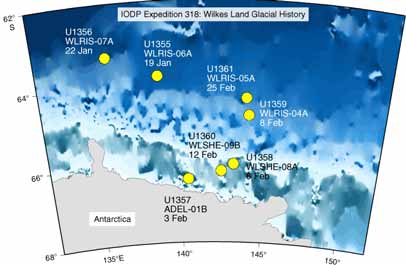 From January to March 2010, the JOIDES Resolution sailed on a two months expedition to Wilkes Land, Antarctica. The aim of the expedition was to explore the history of Antarctic climate over the past 35 million years.

The main objectives were:

Over the duration of the expedition, 2000 m of high-quality middle Eocene–Holocene sediments were drilled at seven sites on the Wilkes Land shelf at water depths ranging between 400 m and 4000 m. The cores represent ~53 m.y. of Antarctic history. Two of the seven sites drilled during IODP Expedition 318 were logged (Holes U1359D and U1361A) with the Triple-combo toolstring, comprising resistivity, density, porosity and natural gamma radiation tools, and the FMS-Sonic toolstring, comprising the FMS micro-resistivity imager, sonic and natural gamma radiation tools. The VSI tool string (geophone and natural gamma radiation tools) was deployed in Hole U1359D only. Of the other five sites, two had to be abandoned before logging due to storms and high seas (Hole U1356A and Hole U1357C), and three did not penetrate deep enough to be logged.