School of Geography, Geology and the Environment

Within the School we host annual lectures in Geography and Geology, given by distinguished speakers in their field of research. These lectures are open to all.

Fast flowing ice streams and outlet glaciers are the volume regulators for the polar ice sheets of Greenland and Antarctica. Thus, the flow speed of ice streams is one of the key controls on the ice sheet’s contribution to sea-level rise. The fast flow of ice steams is controlled and facilitated at their base, making it important to understand processes and conditions beneath them. The Rutford Ice Stream is a fast-flowing glacier that drains ice from the West Antarctic Ice Sheet into the Ronne Ice Shelf. In austral summer 2004-5 with colleagues from the British Antarctic Survey we attempted to drill over 2 km through the ice stream to the bed. Unfortunately, the drill hose broke and we were forced to concentrate on surface experiments. We used data from a network of GPS receivers to show the flow of ice streams varies: near the grounding line the flow is modulated accelerating and decelerating at various tidal frequencies. Seismic reflection data were acquired and comparison between surveys in different years shows an period of rapid subglacial erosion (6 m in 6 years). This erosion was followed the deposition of a new drumlin, at the ice stream bed. The drumlin is 10 m high and 100m wide and formed in a period of no more than 7 years. Then in January this year, 2019, we returned to Rutford Ice Stream with a new hot-water drill and for the first time we successfully drilled three holes to the bed. We used these boreholes to undertake experiments at the bed, and to install instrumentation, as well as retrieving the first samples of basal sediments. I will report on both drilling attempts and report on the first scientific results interpreting results from this year’s successful boreholes.

The Bennett Lecture is named after Dr F W Bennett, a local practitioner and man of standing and influence in the city of Leicester. Dr Bennett was also a keen amateur geologist, and his generosity to the University is recognised both in the naming of the Bennett Building and in this annual lecture.

The Bennett Lecture is a prestigious annual public event, given by a distinguished earth scientist on a topic of their choice. It should be of broad interest and should particularly enthuse and inspire tomorrow's scientists in studying the natural world.

The audience normally includes current staff and students, as well as members of the public. 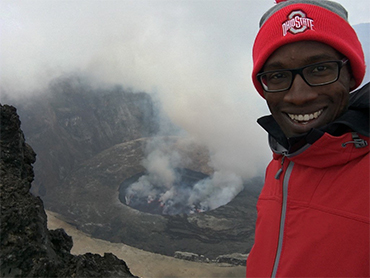 In June 2017, 15 scientists and BBC film crew travelled to Nyiragongo, one of the largest and most active volcanoes in the Democratic Republic of Congo, and home to the largest permanent lava lake on Earth. Posing a permanent threat to the city of Goma, a settlement with >1,000,000 people, Nyiragongo last erupted in 2002, and has been intermittently active ever since. In this talk we will explore the geological setting of this lethal yet mysterious volcano, which is situated within the East Africa Rift, the giant geological fracture responsible for the splitting apart of Africa. This lecture will show footage and photography taken from the volcano summit and deep within the crater, next to the 700 m wide, 600 m deep lava lake, showcasing the volcanoes structure, and the unusual chemistry and physical properties of its lava. Transmitted on BBC2 in October 2017, Expedition Volcano discussed much, much more about the geology and study of this fascinating yet devastating natural wonder, the threat it poses to the nearby populous, and the great wealth and conflict it has brought to this turbulent region.

See past events held in the School of Geography, Geology and the Environment.