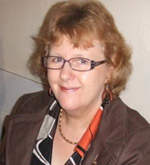 Since receiving my doctorate in 2001, I have held a number of posts. At first I did research for the Compton Verney House Trust, producing a study of the social history of the house and estate.  I was Curator of 78 Derngate, Northampton from 2002-2005, from the beginning of its restoration until the second year of being open to the public. My role combined historical and business skills. I researched the history of this house, remodelled in 1916 by Charles Rennie Mackintosh, presenting the material through display panels, the guidebook and training the volunteer guides. I was also responsible for implementing the day to day running of the house. Then I was employed by the University of Gloucestershire for four years on ‘England’s Past for Everyone’, a project of the Victoria County History Trust, in Herefordshire. This involved engaging local people in research, writing a history of the market town of Ledbury. I am once again a freelance researcher and writer, combining work for the Victoria County History Trust in Herefordshire with being a lecturer for the WEA and other freelance work. I am very involved with the Family and Community History Research Society Almshouse project.