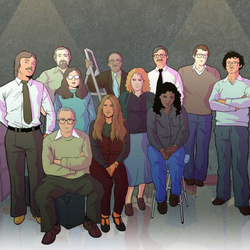 The University could not operate without its army of porters, cleaning and catering staff, administrators and technicians.

“The world-class research and teaching in this University depends on the commitment and quiet dedication of support services,” says staff member Dave Pidgeon.

Colleague Vicky Holmes agrees: "The cleaners, food prep and serving staff, gardeners, security, technicians and all the administrators provide a scaffold for the academic activity.

“They can often go unrecognised as maybe they don't have exciting research projects but, without their hard work and dedication, the University would be a poorer place.”

The world-class research and teaching in this University depends on the commitment and quiet dedication of support services.

The first staff – appointed before the principal – were administrative.

University Secretary Walter Gibbs (the role is now Registrar) was the first employee, and was crucial to getting the University project off the ground.

Less well known is the first female member of staff, Miss Hart, employed in 1920. A friend to students, she was essential to the everyday running of University College and remained there until her retirement in July 1949.

The administration staff “were so friendly and helpful”, says former student George S Boye. “I will for ever remain grateful.” 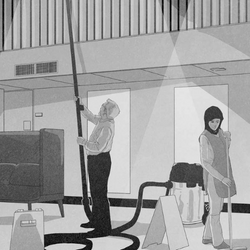 Academic staff “have the best possible environment to begin changing lives” thanks to the work of porters and cleaners, staff member Dave Pidgeon recognises.

"They have a crucial supporting role in ensuring that the campus and its facilities are in place, fit for purpose, clean, open and accessible, and welcoming to students and staff.”

Their work came into its own during the pandemic. “Porters and cleaners have been constantly at work on-site, regardless of risk, and have modified the campus, have sanitised, installed signage, refitted teaching and seminar rooms – all to ensure the campus is safe.”

They [porters and cleaners] have a crucial supporting role in ensuring that the campus and its facilities are in place, fit for purpose, clean, open and accessible, and welcoming to students and staff.

From its earliest days, the University College recognised that "lab boys" and "assistants" were essential to scientific study. Although many were hired, few appear in the archives.

Technicians’ work increased teaching and research capacity over the decades, and they performed demonstrations for generations of students.

However, they have not always felt valued and, as the University expanded, often worked longer hours at lower pay than seemed fair. In 1965, some of these issues were addressed after 60 technicians took strike action.

The first chemistry lab technician, known as “Cobble”, stayed at Leicester for 30 years. His “first name seemed to be secret”, says alumnus Allard Johnson, who reports he won many a game of Solo during wartime firewatching nights.

After the war, a junior laboratory assistant called Terry Garfield arrived and became a University stalwart – not just for technical abilities and rising to Chief Technician.

He established a map and atlas collection, began a tradition of cartography and was a founder member of the Society of University Cartographers.

He retired in 1992 after 46 years. “The University was my life and I enjoyed every moment of working here and taking part socially,” he said.

The University was my life and I enjoyed every moment of working here and taking part socially.

Garfield is best remembered for founding a social society that brought support staff together – the Departmental Staff Common Room.

He was its “heart and soul”, says former employee Hilary Whitbread.

“Each trip had its own handouts and maps carefully prepared by Terry,” says Whitbread.

“He stepped in if there were problems. Who will ever forget the trip to Windsor when the coach became trapped by rising floodwaters? Terry, using the maps he had with him on every trip (just in case), worked with the driver to get everyone home safely.”