The transformative power of education

When Olga* left Russia with her husband in 2012, the pair were running for their lives. Olga’s husband’s relatives had opposed Putin’s regime in the Chechnyan war and the whole family had become a target for the Russian state. Olga had completed a bachelor’s degree in economics and was planning on studying for a master’s, but learning her husband was at risk of being arrested or worse meant abandoning her future. “People were coming from the authorities looking for him,” she explained. “I had to leave the country and leave all my plans and dreams behind.”

When the couple arrived in the UK their English wasn’t good enough for Olga to enrol at university, and as an asylum seeker she was also unable to claim a student loan. They were sent by the Home Office to settle in Stoke-on-Trent and, in time, Olga adjusted into British life, eventually winning a grant to study at Keele University. But just before she was about to take up her place, the Home Office moved the couple to Leicester with no warning.

Unable to work and with no funds to travel, Olga was forced to reject her place at Keele. In a new city with no friends or support network, she sunk into a depression. “Some British people offered me a room in their house [in Stoke] but I didn’t want to leave my husband alone. I was so crushed, I was depressed. I just didn’t want to do anything.”

Four years later things couldn’t look more different. Olga has just completed a masters degree in banking and international finance at the University of Leicester and is working with the British Red Cross to support other asylum seekers and refugees. She is waiting for a final decision on her asylum status, allowing her to work in the world of finance. The masters, funded by a sanctuary scholarship provided by the university, has not only changed her life chances, but helped her rebuild her mental health and changed her way of thinking about the world around her too.

“I have become more confident, full of potential and much happier,” she says. “Now I am able to see things from different perspectives and think critically. I really like how university tutors here taught you to think for yourself, through critical thinking and checking sources. I use it in my everyday life now, when we see videos on the news. I always check who it is, find information about it and think critically about the view, about who or what they stand for. Those studies gave me the chance to make friendships and build my confidence.”

I really like how University tutors here taught you to think for yourself, through critical thinking and checking sources.

The turning point came when Olga, now in her forties, met Pascale Roussel, who oversees the allocation of Sanctuary scholarships for the University's presessional English programmes, provided as part of the institution’s University of Sanctuary scheme. Despite feeling barely able to leave the house at the time, she was encouraged to sign up to a once weekly class to improve her English language skills. She quickly moved through the classes to pre-degree level, then was fluent enough to enable her to enrol into the university to study. Despite the coronavirus pandemic and the switch to home study, she graduated in 2021.

A University of Sanctuary 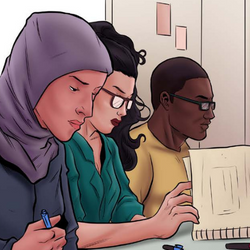 The University of Sanctuary scheme, which aims to make everyone feel welcome and demonstrate how an education can turn life chances around, has a long history. This attitude was firmly established by the Attenborough family who worked tirelessly in their lives to support refugees. During the Second World War, refugee students and academics were welcomed into the university, including Dr Felix Rosenthal from Germany. In the 1950s, Hungarian students were supported to leave behind the Iron Curtain. That legacy continues.

Another refugee to feel the benefit of today’s language courses is journalist and human rights activist Jumana Yahya, an Iraqi citizen who fled to London in 2020 after taking part in a demonstration in Baghdad supporting freedom of speech and women and children’s rights. Militia broke up the protest and branded all participants as working on behalf of outside states such as the US and UK. She feared for her life.

“The day I left Iraq, I was so scared,” she says. “So many activists and journalists have been killed for standing up for what they believed in. Although it was a relief to finally reach the airport and leave the danger behind, my heart was heavy.”

Improving her English language skills is crucial for her ability to continue to work outside her home country. “As a journalist, [at its] core is to write, read, speak and listen,” she says. “Language is an essential tool, like a dentist who uses tools to examine patients. Although my native language is Arabic, I need English to read global and western journals, which are a rich source for the news.”

Yahya graduated with a degree in English while still in Iraq, but when she arrived in the UK it had been eight years since she studied and she did not have the chance to practise her language skills in the interim. Using the remote learning course she was able to bring her English up to an academic standard, allowing her to enrol in a masters degree in international relations at Leicester, also with the support of a Sanctuary scholarship. As she put it: “You know this kind of study depends on language and the ability of the student to absorb the language and the information. I can say the language course equipped me with the knowledge.” She is now studying for a Masters with the goal of doing a PhD - and returning to her work as a journalist.

The University has also offered support to refugee medical professionals by offering free places on courses to prepare doctors/pharmacists and nurses to take an Occupational Education Test (OET).  This is the first step in helping them to retrain and gain employment in the NHS.  The University works with organisations such as RefuAid and Growing Points to offer opportunities for training and mentoring from UK doctors and others with experience to ease their transition into the NHS. 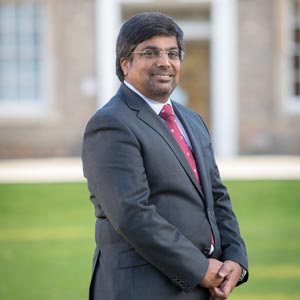 Education and learning can transform lives for all those to commit to it, and nobody understands that better than Leicester’s President and Vice-Chancellor Professor Nishan Canagarajah, whose own route to academic success saw him leave behind his home country of Sri Lanka and travel all over the world using his skills as a gifted engineer. Now he brings those experiences to bear on his leadership of an institution that he wants to ensure offers every single student at the university - whether reading for a PhD or attending once weekly English language classes - the chance to experience their own pivotal moment.

A British Tamil, he left behind a country torn by ethnic conflict to find a new life in a new country, so his life would tell a different story - a story, as he says in his own words, “about the transformative power of education”. In his inaugural address to the university he shared a tamil proverb: “what we know is a fistful, what we don’t know is a world-full”. “The proverb generates an attitude of humility but also of awe towards the mystery of knowledge. I have been influenced by these values since I was a young boy,” he told the university.

Born in Jaffna to teacher parents, Professor Canagarajah’s early education was disrupted by the civil war. School offered him a safe haven from the chaos, but it could not protect him from the realities of conflict; he lost his best friend in the fighting at the age of just 22.

After school he was offered a scholarship to Christ’s College, Cambridge. “That moment changed my life,” he says. “It was also one of the toughest things I’ve done. I had never been abroad, barely spoke English; it was a real culture shock.”

But the move launched his academic career, helped him find friends worldwide and sparked a passion for travel. He went on to secure a scholarship to study for a PhD at Cambridge, dedicating his work as an engineer to improving people’s lives by designing more effective hearing aids (his own mother has had hearing difficulties since childhood).

He climbed the ranks of academia at the University of Bristol before taking the helm at Leicester. He was attracted to the institution because it has a “powerful story to tell” about the power of education and how it transforms the lives of people and whole communities.

In fact it was established as a “living memorial” to those of the city and midlands who lost their lives in the First World War.

“We’ve always existed to improve life,” Professor Canagarajah told the audience gathered at his inaugural address. It’s a philosophy that is embedded throughout the university, with lecturers supported not only to be great teachers of young minds, but encouraged to mentor, advise and listen.

This culture means that all students can benefit from their own moment of transformation - some perhaps more publicly than others.

Back in 1974, young science student Sandya Narayanswami, an undergraduate at the time, became the first Indian woman to appear on the student TV quiz show University Challenge. She was praised by host Bamber Gascoigne for her “exceptionally broad general knowledge”, a moment of acceptance after what she described as a difficult childhood that led her to the power of learning. “I replied, ‘that’s because I spent all my time in libraries’. What I didn’t tell him was that the racism in my school was so bad I spent all my time in the library. I read extensively and retained what I read. At Leicester, I was treated like an intelligent human being and graduated with a first-class degree at the top of my year.”

At Leicester, I was treated like an intelligent human being and graduated with a first-class degree at the top of my year.

That spirit of endeavour and overcoming what seems impossible has stayed with Narayanswami. She went on to obtain a PhD from St Andrews and enjoy an impressive career inside academia, as a scientist and fundraiser. Then, in late middle age, she took up flying lessons, and was granted her pilot’s licence at the age of 64. She even made a fearless late life application to NASA’s astronaut training programme, but was very politely declined.

She told The Guardian flying had helped her continue to overcome the abuse of her childhood: “When I’m in the plane I focus totally on flying…. [I’m] part of a huge network of people who are communicating by radio frequency. There is no sense of skin colour. We are all tied together by our voices.” 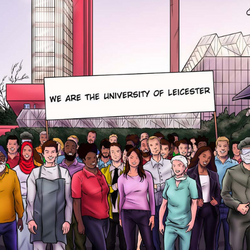 So what next for Olga in Leicester, as diplomatic tensions with Russia escalate over the Ukraine invasion? She hopes for a more speedy resolution to her application for settled status, now that the world can see how many native Russians feel about the Putin regime. “Only 20 percent of the population is for Putin, the establishment, but they’re too scared to go out [and protest]. But now all the world knows the real face of the authorities there and it’s sad.” She recently travelled to London to take part in an anti-war demonstration, in support of her Ukrainian neighbours. “We wanted to show solidarity. We were really scared but we didn’t want to look back and regret, asking ourselves ‘why didn’t we do it’.”

When her case is completed she will finally be able to work in the UK, and give back to the community and the university that has supported her to rebuild her life. “For me, education and work is so important. I’m an ambitious person: I want to work, I want to pay my taxes. I want to live like a normal person.”

*Some names have been changed for safeguarding purposes