BepiColombo - the mission to Mercury 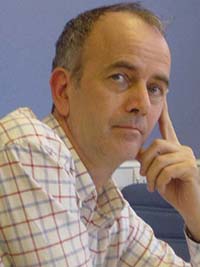 George Fraser was born 22 July 1955 near Inverness and was a proud Highlander. Quietly spoken but determined, he was to make a major contribution to the new space science of X-ray astronomy during a 36-year career at the University of Leicester, for the final 11 years as Director of the University’s internationally-renowned Space Research Centre. George was also an expert teacher whose students were always treated to entertaining lectures. His calm assurance and his excellent experimental skills were also used to good effect in laboratory teaching. His attention to detail and extensive knowledge also made his PhD students realise that he expected them to strive for their very best.

Educated at Elgin Academy and the University of Aberdeen, George graduated with a First in Natural Philosophy in 1977. He then joined the X-ray Astronomy Group at Leicester in October 1977, supported by an Science Research Council studentship. His rather dry-sounding thesis on ‘Position Encoding for Imaging X-ray Detectors’ in 1981 was to provide the technical basis for X-ray cameras deployed on several international space astronomy missions over the next 25 years.

Following two years as a post-doctoral researcher in the X-ray Astronomy Group, Dr Fraser was appointed to a Lectureship in the Department of Physics. His growing expertise in many aspects of detector physics was recognised by appointment as a consultant to ESA, and as Co-Investigator for key instruments on both the Einstein Observatory (launch 1978) and – two decades later – on one of NASA’S Great Observatories, Chandra, launched in 1999 and still operating successfully. A long-term interest in collaborating with industry yielded early benefits in a joint programme with Mullard Ltd to develop low-noise glass for microchannel plate detectors, ultimately to yield a substantial sensitivity gain for high resolution imaging observations with Chandra.

Promoted to a personal chair in 1999, Professor Fraser was appointed as Director of the University Space Research Centre in 2002. Over the following 11 years he oversaw the expansion of the SRC programme to cover Astronomy, Planetary Science and Earth Observation. He also fostered an active programme seeking to transfer the benefits of space technology into other areas, especially for advanced medical and biological devices. From a personal research perspective, it is most unfortunate that George will not be able to pursue his role as Principal Investigator for the Imaging X-ray Spectrometer on ESA’s Bepi-Colombo mission to the planet Mercury (launch 2017). His detector expertise will also be greatly missed as the Leicester team look to play a leading role in the billion-euro Athena mission recently selected by ESA for launch in 2028.

"Professor Fraser's innovative technical developments have been central to many of the X-ray missions over the last three decades, several of which are still in orbit, working well and producing unique data on the high energy Universe.  One example of his innovative skills is the so-called 'lobster-eye' concept applied to X-ray imaging. This is the basis of instruments proposed for several future space missions. His influence has been felt at many levels, and he has written a widely used textbook on X-ray detectors. Professor Fraser has also successfully bridged the gap between academia and industry.  His contributions have played a major role in what has been recognised as a 'Golden Age of X-ray astronomy'."

With annual research and development income of order £5 million, and high visibility involvement in many space missions, from XMM-Newton and Beagle 2 to ENVISAT and NASA’s Swift mission, the SRC remains one of the University’s major assets. Retaining that status will be the challenge for whoever takes on the massive task of succeeding our much loved friend and colleague, George William Fraser. His many friends and colleagues in the University and the wider space science community have lost one of the leaders in the field, universally respected for his contributions and appreciated as an honest and warm individual.