The Bioarchaeology of an Agricultural Revolution

The period between c 800 – 1200 AD saw dramatic changes in farming practices across large parts of Europe, enabling an increase in cereal production so great that it has been described as an agricultural revolution.  This ‘cerealisation’ allowed post-Roman populations not only to recover, but to boom, fuelling the growth of towns and markets. In England, this meant that many regions became more densely populated than ever before.  Three key innovations made this increase in yields possible:  crop rotation, e.g. planting with winter wheat followed by spring barley; widespread adoption of the mouldboard plough, which enabled farmers to cultivate heavier, more fertile soils; and extensification of cultivation, whereby fertility was maintained by short fallow periods during which sheep grazed on the stubble, rather than by intensive manuring.

To operate this more productive but costly system of farming, peasants had to share expensive resources such as teams of oxen and mouldboard ploughs, and cultivate extensive, unenclosed, ‘open fields’ communally. To do this, they had to live in close proximity, leading to the formation of the nucleated villages, set amid extensive arrays of strip fields, that can still be seen in many parts of the countryside today. In this way, innovations in farming transformed large parts of the England’s landscape and with it, its social geography.

This four-year, ERC-funded project lead by the University of Oxford aims to understand when, where and how this ‘mould board plough package’ originated and spread, by generating the first direct evidence of medieval land use and cultivation regimes from excavated plant remains and animal bones, using a range of scientific methodologies. Analysis of crop stable isotopes in preserved cereal grains will enable us to assess the degree to which productivity was boosted by manuring; weed flora will also reveal the extent to which fields were manured and tilled, as well as providing evidence of sowing times and crop rotation.  The lower limb bones of cattle will be examined for pathologies caused by pulling a heavy plough. Pollen data will reveal the changing impact of cereal farming on the medieval landscape and will be used to produce the first national model of early medieval land use.  Patterns emerging from these bioarchaeological data will then be compared with the evidence from excavated farms to explore the inter-relationship between arable production, stock management and settlement forms. A suite of over 400 radiocarbon dates on charred cereals, bones and pollen cores will make it possible to locate the origins and spread of open fields in time and space. 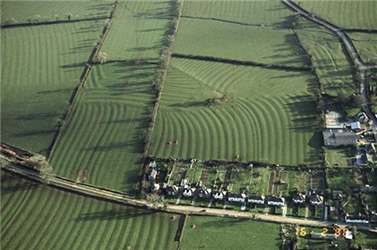 A village set within a preserved open field system, with surviving ridge-and-furrow.