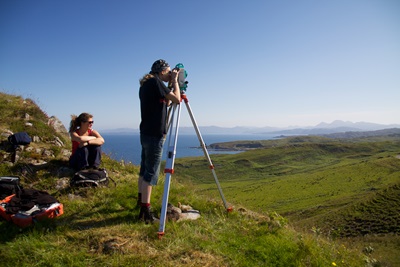 The Ardnamurchan Transitions Project is a long running investigation of the archaeology and history of the Ardnamurchan Peninsula, Western Scotland. Since 2006 we have been excavating a range of sites from a Neolithic chambered cairn, via Bronze Age burials and Iron Age settlements to villages emptied during the Highland Clearances. Ardnamurchan has seen almost no previous archaeological work, which means it is replete with sites, histories and discoveries waiting for us to find. The project brings together Archaeology Scotland, students and staff from the Universities of Manchester and Leicester as well as local people and community groups.

Our project is interested in exploring how landscape, place, materials and people create ways of living over both the short and long-term. What continuities in landscape use can we trace in the thousands of years the peninsula has been occupied? How have ways of life changed?

In 2011 as part of the project we excavated the first Viking boat burial discovered by archaeologists on the UK mainland. 1000 years ago a Viking was buried with a sword, an axe, a ladle, a spear, a shield, metal working tools and more. This marked one of the many transitions between different ways of living in Ardnamurchan, a place with a complex history awaiting to be told.