In February 2023, our current Chancellor, Lord David Willets, comes to the end of his five-year term-of-office and will be stepping down from the role.

Following a recruitment process, conducted by our Chancellor Search Committee, we are delighted to announce that Dr Maggie Aderin-Pocock MBE will become our new Chancellor on Wednesday 1 February 2023. 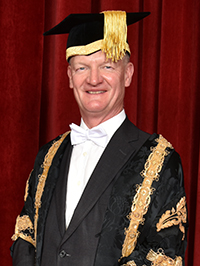 Former Minister for Universities and Science, the Rt Hon Lord Willetts was installed as the University’s seventh Chancellor during the 2018 summer degree congregations.

The role of Chancellor is largely ceremonial, presiding at major ceremonies – including graduation – and serving as Chair of the annual meeting of the University’s Court.

An honorary graduate of the University, David Willetts was awarded an honorary doctorate of Laws in 2016 for his distinguished record in Parliament, for his advocacy on behalf of Britain’s universities, for his engagement with the university sector, and for his continuing work on behalf of all of us.

In 2015, Lord Willetts delivered the inaugural lecture for our Chancellor’s Distinguished Lecture Series on ‘The future of the UK science innovation system’. He also previously opened a space research facility in our Department of Physics and Astronomy.

A life peer, David entered the world of politics as a researcher for Nigel Lawson, who represented Blaby, Leicestershire. He then moved to the Treasury, where he rose rapidly before moving to the Centre for Policy Studies as Director of Studies.

In 1992, he entered Parliament as the MP for Havant. He quickly became a whip, rejoicing in the title of Lord Commissioner of HM Treasury. He was then appointed as a Parliamentary Secretary in the Cabinet Office, and then promoted to the post of Paymaster General.

During Mr Blair’s three governments, he held a series of appointments as Shadow Secretary of State: for Education and Employment, for Social Security, for Work and Pensions, for Trade and Industry, for Education and Skills, and finally for Universities and Skills. In the wake of the election of 2010, when the Conservatives formed a coalition with the Liberal Democrats, he was appointed Minister of Universities and Science, a position he held from 2010-2014.

He is married with two children and has written a number of books, pamphlets and essays, usually on economic and social policy. In The Pinch: How the Baby Boomers Took their Children’s Future – and why they Should Give it Back, he suggests that the wealth of the baby boomer generation has been created at the expense of the younger generation, and that if our politicians and cultural leaders refuse to rise to the challenge, the next generation will have to work longer hours for less pay, pay more taxes and suffer a diminution of opportunity for social mobility.

His most recent book, A University Education, presents a compelling case for the ongoing importance of the university, both as one of the great institutions of modern society and as a transformational experience for the individual.