The University of Leicester has been pleased to host visits by members of the Royal Family throughout its history.

2018: HRH The Duke and Duchess of Cambridge

2008: HM The Queen and HRH The Duke of Edinburgh 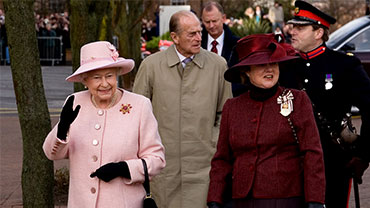 HM Queen Elizabeth II officially opened the David Wilson Library in December 2008. The Queen and The Duke toured the state-of-the-art Library and met with staff, students and sponsors, including David Wilson, the primary benefactor. The tour of the £32M Library included demonstrations by students from the Medical School, who discussed some of their work on the respiratory system. The Royal Couple also met with students of space research, earth observation, computer science and archaeology as well as seeing how IT is used by students to research and present their work. They were shown an exhibition of photographs, press reports and commemorative publications from the Royal Visit of May 1958 and some of the University’s Special Collections - a small display of rare Bibles, local history books and other volumes of interest from the Library's Special Collections. Finally, the Queen unveiled a commemorative plaque and the Royal couple signed a portrait photograph to mark the historic occasion.

HM The Queen and HRH The Duke of Edinburgh also met staff from the University in 2002 when they visited the National Space Centre to learn about the Beagle 2 mission to Mars.

2002: HRH The Earl and Countess of Wessex

Prince Edward, the Queen's youngest son, and his wife visited the Richard Attenborough Centre in September 2002, where they met members of staff and students before viewing an exhibition of some of the art produced in the Centre. They also listened to a drumming workshop and watched a short dance programme. They chatted to artists in the art studio and admired an exhibition of paintings and sculpture. A group of Japanese students, on a language training course at the University, were among those outside the Centre, waiting to greet the couple. 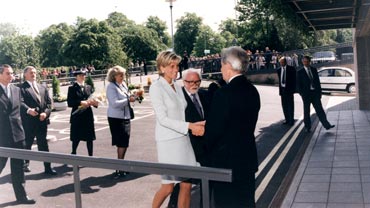 At the invitation of Lord Attenborough, Princess Diana visited the University in May 1997 to open what was then called the Richard Attenborough Centre for Disability and the Arts (now the Attenborough Arts Centre). She met some disabled students and was shown some of the pioneering work being undertaken in the new, purpose-designed building which had cost £2 million.

1958: HM The Queen and HRH The Duke of Edinburgh 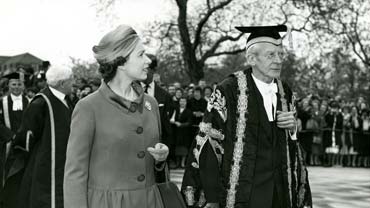 One year after granting University College Leicester the Royal Charter which transformed the institution into the University of Leicester, HM The Queen visited the University in May 1958, accompanied by HRH The Duke of Edinburgh, to officially open the Percy Gee Students' Union Building. The Royal Couple were given an enthusiastic welcome by students when they made a short tour of the new building and talked to some of the students. 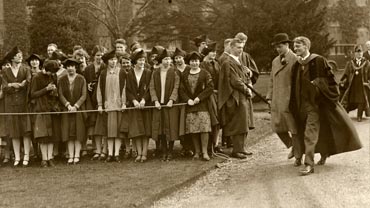 The future King Edward VIII, uncle of Queen Elizabeth II, was received at the University by its Principal, Dr RT Rattray, and His Grace the Duke of Rutland for a tour of the campus. He inspected the Fielding Johnson Building, and was also highly pleased with the then University library, remarking, "Your collection of books is highly creditable." After inscribing his name in the distinguished visitors' book, the Prince and the Mayor of Leicester planted a tree in the front lawn of the Fielding Johnson Building to commemorate his visit. After the tour concluded the prince departed with an album of photographs of the University as a souvenir. 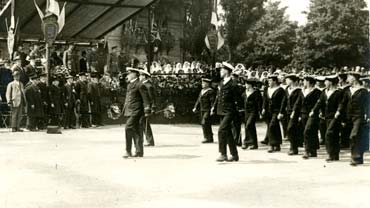 The Queen's grandfather visited Leicester in June 1919, while the city was raising funds for the establishment of a University College. "It is a matter of congratulation that Leicester proposes to establish a university which is to serve as a centre for advanced studies for the Eastern Midlands," he told assembled dignitaries. "I welcome a scheme which, while bringing a liberal education within the reach of all, will establish that contact between research and industry, which is of vital importance to our future prosperity." The Leicester, Leicestershire and Rutland University College opened its doors to students in 1921.