Vaccines for school and colleges

We use vaccines to build up immunity to dangerous, disease-causing pathogens. Then, when we encounter these pathogens, we can fight them off before they can cause disease.

When we get infected by a disease-causing microorganism,  the immune system recognises molecules on their surface called antigens. These antigens can only be recognised if they do not resemble components of our own cells. We call these recognisable antigens 'foreign'. Being able to differentiate foreign antigens from 'host' antigens, is what prevents our immune system from attacking our own cells.

Once a microorganism has been recognised, cells of the immune system called B cells are stimulated to produce antibodies. These antibodies bind to the antigen making them a target for killing by specialised immune cells (for example T-killer cells). Some  B cells will specialise into B memory cells that have a far longer half life in the body than their un-specialised parent cells. B memory cells can respond far quicker to future infection.

This is called memory immunity and this is the principle we use in vaccination.

How do vaccines work?

Vaccines contain either antigens of disease causing microorganisms or an inactivated form of the complete microorganism. If we inject these into the blood, they are unable to cause disease, but do help our immune system to build up memory immunity. If then, we are infected with a complete, disease causing microorganism the B memory cells will be ready to spring a quick response and clear the invading pathogen. Memory immunity is far quicker than the initial immune response we get the first time we see an antigen. Memory immunity results in a far quicker response, killing pathogens before they can cause any damage. 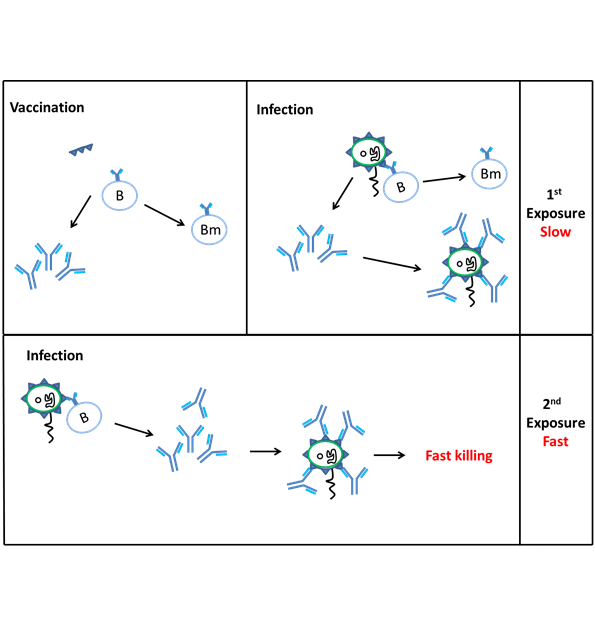 How effective are vaccines at preventing disease?

Over the years, vaccines have been extremely successful at protecting us from infectious disease.

Poliomyelitis is an infectious disease caused by the poliovirus. In many people this viral infection has no symptoms. In some cases this infection can lead to muscle weakness/deterioration called poliomyelitis and many people may never recover.

There are two vaccines that have been developed based on dead and weakened (attenuated) polioviruses. These have all but eradicated poliomyelitis and represent one of medicines huge successes.

Developing useful vaccines is a very difficult process, as it can be very troublesome to predict how the immune system will respond to an antigen. Additionally, pathogens evolve quickly to escape them attack by the immune system.

One vaccine that has proved very difficult to develop and one that we are interested in at the University of Leicester is the newly introduced vaccine against Neisseria meninigitis serogroup B (MenB), a major cause of bacterial meningitis.