DNA (or deoxyribonucleic acid) is the molecule that carries the genetic information in all cellular forms of life and some viruses. It belongs to a class of molecules called the nucleic acids, which are polynucleotides - that is, long chains of nucleotides.

Each nucleotide consists of three components:

The backbone of the polynucleotide is a chain of sugar and phosphate molecules. Each of the sugar groups in this sugar-phosphate backbone is linked to one of the four nitrogenous bases. 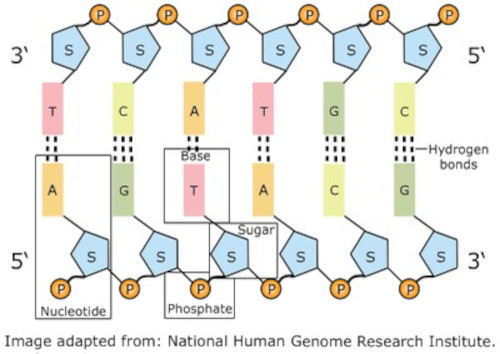 DNA's ability to store - and transmit - information lies in the fact that it consists of two polynucleotide strands that twist around each other to form a double-stranded helix. The bases link across the two strands in a specific manner using hydrogen bonds: cytosine (C) pairs with guanine (G), and adenine (A) pairs with thymine (T).

The double helix of the complete DNA molecule resembles a spiral staircase, with two sugar phosphate backbones and the paired bases in the centre of the helix. This structure explains two of the most important properties of the molecule. First, it can be copied or 'replicated', as each strand can act as a template for the generation of the complementary strand. Second, it can store information in the linear sequence of the nucleotides along each strand.

It is the order of the bases along a single strand that constitutes the genetic code. The four-letter 'alphabet' of A, T, G and C forms 'words' of three letters called codons. Individual codons code for specific amino acids. A gene is a sequence of nucleotides along a DNA strand - with 'start' and 'stop' codons and other regulatory elements - that specifies a sequence of amino acids that are linked together to form a protein.

There are a two points to note about the genetic code: 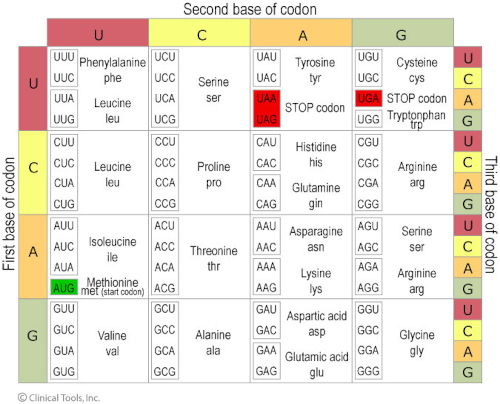 The enzyme helicase breaks the hydrogen bonds holding the two strands together, and both strands can then act as templates for the production of the opposite strand. The process is catalysed by the enzyme DNA polymerase, and includes a proofreading mechanism. 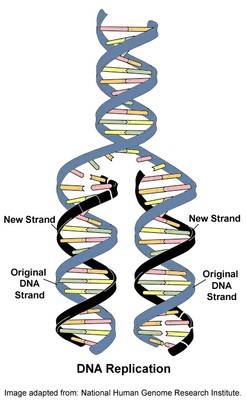 The gene is the basic physical and functional unit of heredity. It consists of a specific sequence of nucleotides at a given position on a given chromosome that codes for a specific protein (or, in some cases, an RNA molecule).

The structural components of a gene

The label eukaryote is taken from the Greek for 'true nucleus', and eukaryotes (all organisms except viruses, Eubacteria and Archaea) are defined by the possession of a nucleus and other membrane-bound cell organelles.

The nucleus of each cell in our bodies contains approximately 1.8 metres of DNA in total, although each strand is less than one millionth of a centimetre thick. This DNA is tightly packed into structures called chromosomes, which consist of long chains of DNA and associated proteins. In eukaryotes, DNA molecules are tightly wound around proteins - called histone proteins - which provide structural support and play a role in controlling the activities of the genes. A strand 150 to 200 nucleotides long is wrapped twice around a core of eight histone proteins to form a structure called a nucleosome. The histone octamer at the centre of the nucleosome is formed from two units each of histones H2A, H2B, H3, and H4. The chains of histones are coiled in turn to form a solenoid, which is stabilised by the histone H1. Further coiling of the solenoids forms the structure of the chromosome proper.

Each chromosome has a p arm and a q arm. The p arm (from the French word 'petit', meaning small) is the short arm, and the q arm (the next letter in the alphabet) is the long arm. In their replicated form, each chromosome consists of two chromatids.

The chromosomes - and the DNA they contain - are copied as part of the cell cycle, and passed to daughter cells through the processes of mitosis and meiosis.

A photograph of the chromosomes in a cell is known as a karyotype. The autosomes are numbered 1-22 in decreasing size order. 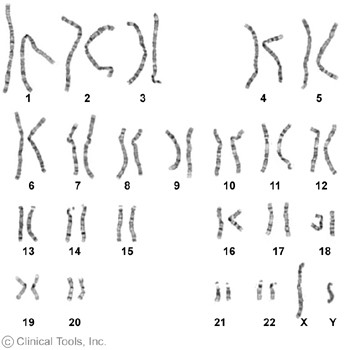 The prokaryotes (Greek for 'before nucleus' - including Eubacteria and Archaea) lack a discrete nucleus, and the chromosomes of prokaryotic cells are not enclosed by a separate membrane.

Most bacteria contain a single, circular chromosome. (There are exceptions: some bacteria - for example, the genus Streptomyces - possess linear chromosomes, and Vibrio cholerae, the causative agent of cholera, has two circular chromosomes.) The chromosome - together with ribosomes and proteins associated with gene expression - is located in a region of the cell cytoplasm known as the nucleoid.

The genomes of prokaryotes are compact compared with those of eukaryotes, as they lack introns, and the genes tend to be expressed in groups known as operons. The circular chromosome of the bacterium Escherichia coli consists of a DNA molecule approximately 4.6 million nucleotides long.

In addition to the main chromosome, bacteria are also characterised by the presence of extra-chromosomal genetic elements called plasmids. These relatively small circular DNA molecules usually contain genes that are not essential to growth or reproduction.