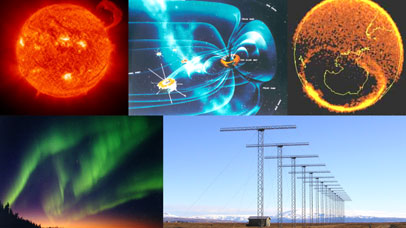 Space plasma physics is the study of the Sun’s hot, ionized outer atmosphere and its interactions with the planets and other bodies of the solar system. Solar-terrestrial physics (STP) applies specifically to the processes occurring as the solar wind couples with the plasma environment of the Earth, that is the magnetosphere and ionosphere, and how these impact our atmosphere and technological infrastructure such as satellites, telecommunications networks, power grids, and pipelines. On one hand, STP explains how the magnetosphere protects us from the solar wind and produces the beautiful auroras, but on the other it studies the potentially hazardous effects of Space Weather.

We undertake world-class research in space plasma and solar-terrestrial physics, through data analysis, modelling, and theory. We are a founding member of the international SuperDARN collaboration which designs, deploys, and operates a global network of ionospheric radars.

We are centrally involved in the development of the forthcoming ESA/CAS SMILE (Solar wind, Magnetosphere, and Ionosphere Link Explorer) spacecraft mission which will for the first time image the magnetosphere in X-rays.