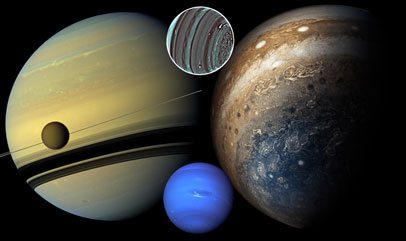 Planetary scientists at the University of Leicester explore these diverse atmospheres via a combination of observations from sophisticated interplanetary spacecraft, space-based telescopes, and world-leading ground-based observatories. These data reveal atmospheric dynamics, meteorology, chemistry, clouds and climate, and how they combine to shape the weather conditions on distant worlds.

Leicester’s planetary atmospheres team use facilities spanning the electromagnetic spectrum, exploiting both reflected sunlight in the UV, visible, and near-infrared, and thermal emission in the mid-infrared, sub-millimetre and microwave.

The primary spacecraft used by the team include the Cassini mission to Saturn and the Juno and JUICE missions to Jupiter (Leicester academics are co-investigators on all three missions). These are supplemented by spectroscopic observations from space (the James Webb Space Telescope, Hubble Space Telescope, Spitzer and Herschel Space Telescopes) and from the ground (ESO’s Very Large Telescope, the Atacama Large Millimetre Array, Subaru, Gemini, and NASA’s Infrared Telescope Facility). Together, these allow the team to reconstruct a planet’s atmosphere in three dimensions, and to understand the natural cycles shaping atmospheric evolution through time.