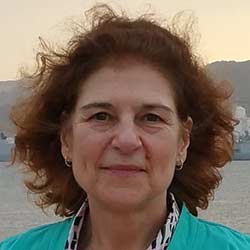 Her expertise includes development of reliable intelligent embedded systems for AIoT (Artificial Intelligence of Things) that meet application requirements and covers the whole development cycle from algorithm investigation and modification through modelling to software implementation and hardware acceleration on embedded computing platforms such as Field Programmable Gate Arrays (FPGAs), Multi-core processors, and Graphical processing units (GPUs). There are numerous application areas for this type of systems including robotic systems, smart phones, aircraft, autonomous cars, and spacecraft; the Internet of things (IoT) being the largest and fast growing application field of embedded intelligence.

A key focus of Professor Vladimirova’s research has been the development of reliable and intelligent high-performance computing systems on board satellites, capable of withstanding the effects of some of the hazards of the space environment.

The research started at the Surrey Space Centre of the University of Surrey in Guildford, where Professor Vladimirova worked closely with the leading UK small satellite manufacturer, Surrey Satellite Technology Limited (SSTL). The research group that she founded and led there became internationally recognised for pioneering new ideas and innovative solutions, such as the following:

This work was continued at the School of Engineering of the University of Leicester, which Professor Vladimirova joined in 2011, where the following main achievements were accomplished:

My research interests are in the areas of embedded computing and microelectronics design for autonomous intelligent cyber physical systems & IoT. Current activities can be divided into four streams: