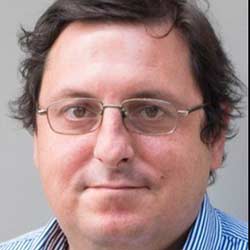 Dr Raul Carstocea focuses on nation-building in the 19th and 20th centuries and its impact on minorities. He specialises in the history of minority groups in Central and Eastern Europe, and phenomena such as xenophobia, racism, and anti-Semitism. His expertise in discrimination and racism against minorities is helping to inform how to best support these communities during the COVID-19 outbreak.

Dr Carstocea is currently developing a project to explore the impact of COVID-19 on the Roma minority in Moldova, one of the most discriminated minorities in Europe. As a community living mostly in rural areas, with a high poverty rate and often experiencing very poor housing conditions - including access to clean water - the Roma are especially vulnerable and in urgent need of special assistance during the COVID-19 crisis. These factors are amplified as the Roma are exposed to systemic racism, including allegations about poor hygiene and accusations of carrying and spreading disease. As a result, there has been a significant increase in racist incidents in the context of the pandemic.

This project is part of the University of Leicester’s portfolio of Global Challenges Research Fund projects, carrying out cutting-edge research in partnership with local universities, policymakers and communities that addresses the challenges faced by countries experiencing chronic disadvantage.

My PhD addressed the role of anti-Semitism in the ideology of the ‘Legion of the Archangel Michael’, Romania’s interwar fascist movement, and the role it performed as a mobilising political tool for the legionary movement. I argued that, although significantly indebted to a history of anti-Semitism in Romania before World War I, the typically fascist legionary anti-Semitism was far more comprehensive and virulent than all previous manifestations, and comparable in terms of its radicalism and centrality in the movement’s ideology with the Nazi one. At the same time, my PhD thesis showed that legionary anti-Semitism differed considerably, to the point of outright opposition, from the biological racial grounding of Nazi anti-Semitism, emphasising cultural and religious arguments and positing religion rather than biology as a criterion for exclusion. Such an interpretation contributes to a more nuanced and qualified understanding of anti-Semitism, as well as of its entanglements with other forms of exclusion, religious intolerance and othering. My first monograph, which I am currently completing and which draws on the PhD thesis, uses legionary anti-Semitism as an entry point into exploring the constellation of exclusionary narratives historically reflecting both transfers and adaptations of concepts developed in the European ‘centre’ and specificities related to distinct developmental paths.

My other research interests include:

My next research project examines interwar fascism as a global anti-universalist project, with a particular focus on fascist temporalities and their restructuring of space.

Bringing Out the Dead: Mass Funerals, Cult of Death and the Emotional Dimension of Nationhood in the Case of the Legionary Movement in Interwar Romania, in Maarten van Ginderachter, Xosé Núñez Seixas and Andreas Stynen (eds.), The Personal and Emotional Dimensions of Nationhood in European History (19th Century to World War II) (London, in press).

The Unbearable Virtues of Backwardness: Mircea Eliade’s Conceptualisation of Colonialism and his Attraction to Romania’s Interwar Fascist Movement, in Dorota Kołodziejczyk and Siegfried Huigen (eds.), Central Europe Between the Colonial and the Postcolonial (Basingstoke, in press).

Building a Fascist Romania: Voluntary Work Camps as a Propaganda Strategy of the Legionary Movement in Interwar Romania, Fascism Vol. 6 No. 2 (2017), pp. 163-195.

Native Fascists, Transnational Anti-Semites: The International Activity of Legionary Leader Ion I. Moţa, in Arnd Bauerkämper and Grzegorz Rossoliński-Liebe (eds.), Fascism without Borders: Connections and Cooperation between Movements and Regimes in Europe from 1918 to 1945 (New York, 2017), pp. 216-242.

Breaking the Teeth of Time: Mythical Time and the ‘Terror of History’ in the Rhetoric of the Legionary Movement in Interwar Romania, Journal of Modern European History Vol. 13 No. 1 (2015), pp. 79-97.

My teaching focuses on the intellectual, cultural and conceptual history of Central and Eastern Europe in the 19th and 20th centuries, with an emphasis on state formation and nation-building processes, nationalism, anti-Semitism, fascism, and the Holocaust.