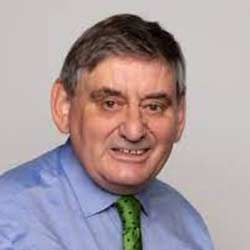 Emeritus Professor R Paul Symonds specialises in the treatment and support of cancer patients receiving radiotherapy and chemotherapy. His considerable experience and publications include the treatment of gynaecological, head and neck, and urological cancer – including the information needs and psychological support patients require, including the needs of patients from ethnic minority backgrounds.

Professor Symonds’ current research is to develop a rapid genetic test to predict if patients will develop late radiotherapy toxicity. This recently has been centred on examination of the relationship of late side-effects, time of treatment, and variant body clock genes in breast cancer patients. The research shows that some patients should be treated in the morning and others in the afternoon, and has been confirmed in a pan-European study. Working alongside Leicester academic Dr Christopher Talbot, Professor Symonds research used data from Maastricht, Ghent, Leuven, Milan, Montpelier, Santiago and Barcelona, as well as Leicester.

Professor Symonds’ expansive contribution to the field of cancer research was recognised in January 2020, when he received the prestigious Exceptional Contribution Award by the Royal College of Radiologists.